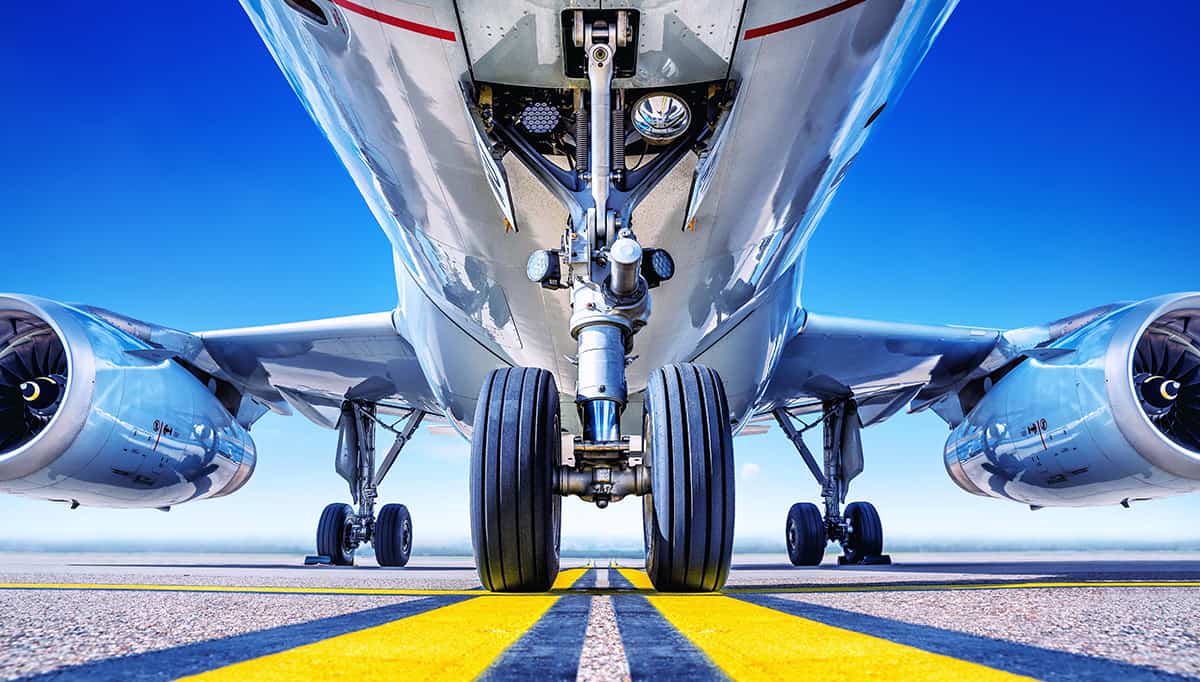 Airplane manufacturers have to pay careful attention to the components that go into their products, including airplane tire sizes.

Regardless of size, all airplanes are designed with specific tire sizes, but not all sport the same sized tires.

In essence, airplane manufacturing companies have to follow a specific set of requirements set by the Federal Aviation Administration, including airplane tire sizes.

Below, I’ll go through the basics of what a layman might want to know concerning airplane tire sizes. 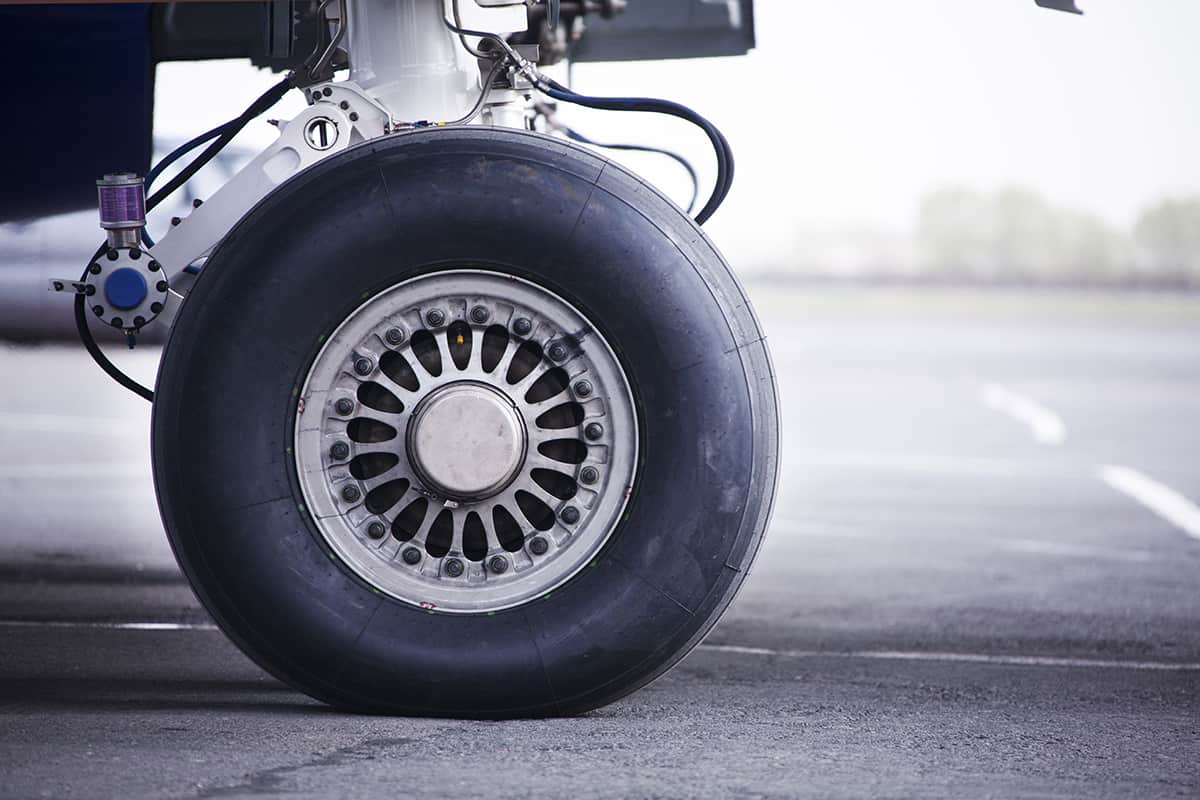 The size of an airplane tire is indicated on the tire’s sidewall. Although this is not always the case, plane tires are usually measured in inches. For instance, airliners have three numbers that indicate the size of the tires.

The first number is the diameter of the tire. The diameter varies from plane to plane, but some airliners will have 30-inch-wide tires.

The second shows the distance between each tread. The space is typically between 6 and 11 inches.

Finally, the third number refers to the size of the rims. The most common rim sizes measure 8 to 16 inches in diameter.

Why Airplane Tires Are So Small

As I mentioned previously, the size of an airplane’s tires will vary from plane to plane. In general, larger aircrafts will sport larger tires. However, relative to the size of the airplane, the size of the tires can seem insignificant.

To put this into perspective, a sedan may come with a tire that’s rated 215/65R15. What these numbers show is that the tire’s width measures 215 millimeters (8.5 inches) wide, has a 65% cross-section ratio, and will slip snugly around a 15-inch-wide rim. In comparison, sedans have a larger tire-to-body ratio than airplanes.

There’s a ton of science behind why airplane tires don’t explode when they land. To put it into simpler terms, the materials that go into the tire prevent it from falling apart upon impact. Of course, this is assuming that the tires have not exceeded their limit, which is typically between 100 and 500 landing cycles.

Airplane tires also have to bear the weight of the aircraft when it is parked on the tarmac. It also has to deal with the friction created as the plane lands. The friction creates heat that will eventually wear the tires beyond recognition.

This is why airplane manufacturers use durable materials like Kevlar and conductive rubber. These flexible materials are lightweight and can withstand friction and immense heat.

Airplane Tires Are Filled with Nitrogen 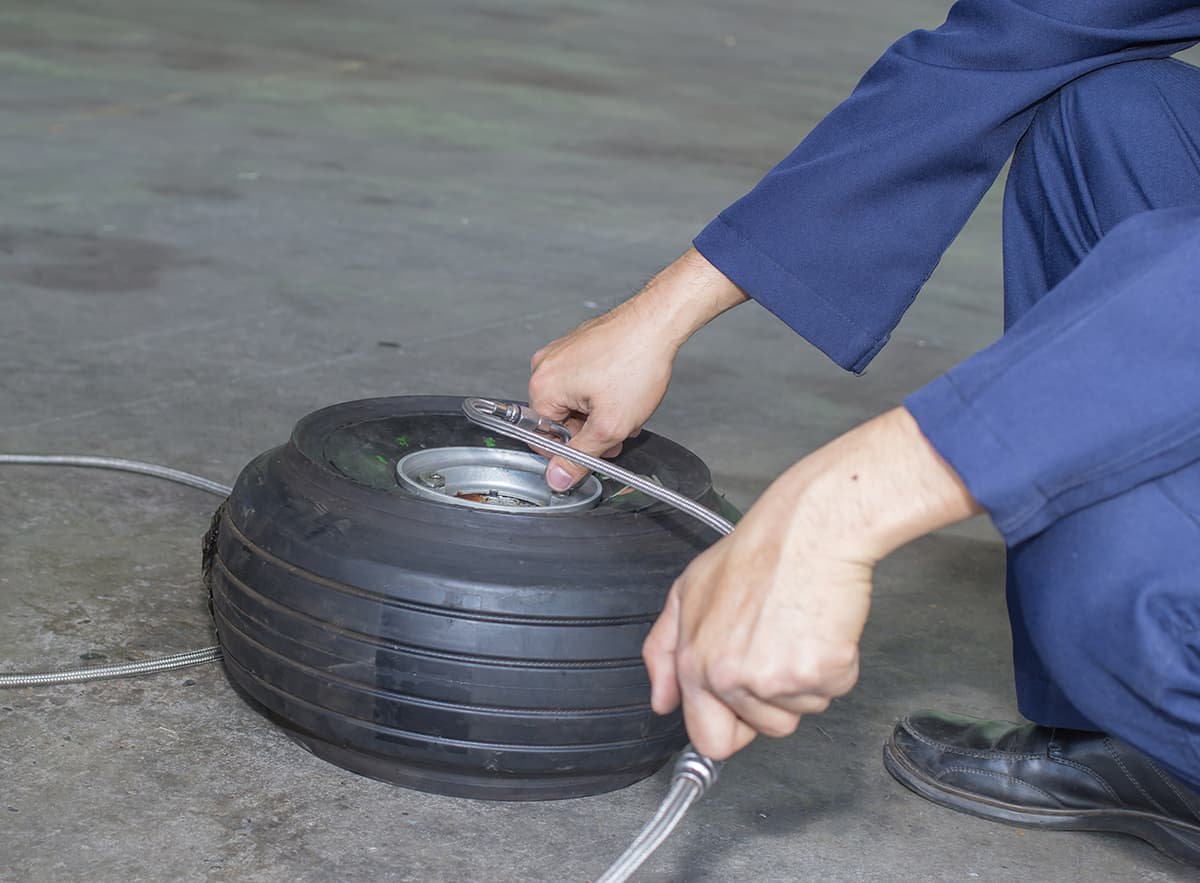 It’s also imperative that airplane tires are filled with nitrogen rather than regular compressed air. Nitrogen is naturally non-flammable, so if anything goes awry during landing—e.g., sparks find their way into a tire nearing the end of its cycle limit—the tire will not automatically ignite and explode.

In addition, oxygen is a poor gas choice for filling airplane tires. Oxidation will chew through the plane’s tires and landing gear, accelerating the rate at which the plane depreciates over time. Nitrogen doesn’t pose this sort of problem.

Number of Tires per Plane

The number of tires found on an airplane varies from model to model. For instance, the Boeing 777 has 14 tires, whereas an Airbus A380 has 22. As for the humungous Antonov An-225, it requires 32 tires to bear the plane’s weight and payload and land safely.

Each airplane tire is pumped with at least 200 PSI of pressure. To put that into perspective, your car’s tires are designed to handle between 32 and 35 PSI before it begins to lose traction.

Why Are Airplane Tires Smooth?

If you compare a car tire to that of an airplane, you’ll find that airplane tires have several groves that run along vertically—i.e., along the length of the tire. Car tires, on the other hand, have horizontal grooves. The main purpose of having smooth, vertical treads instead of car-tire-style treads is to allow water to drip away as the tire rotates.

How Many Cycles Do Airplane Tires Last? 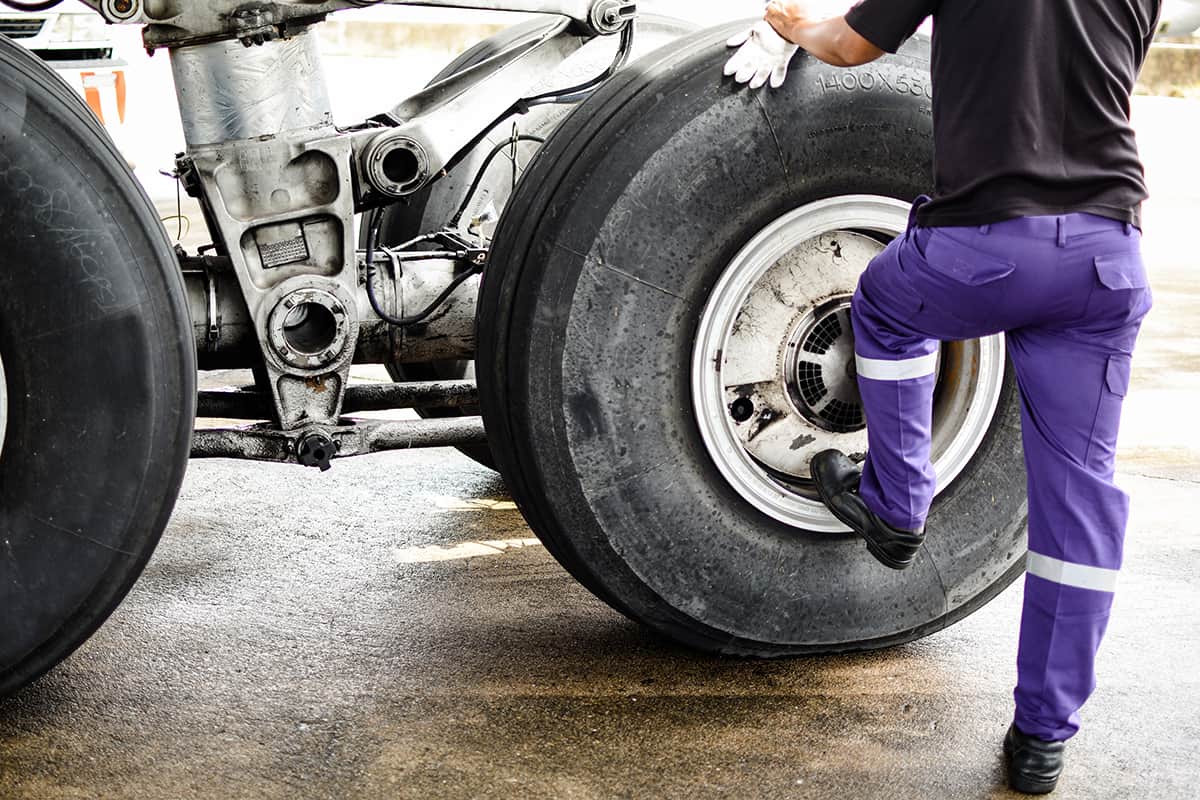 On average, a single airplane tire can withstand anywhere from 50 to 100 landing cycles. However, some of the larger tires can last for up to 500 cycles before decommissioning.

If you pay attention to a landing airplane, you may notice copious amounts of smoke emanating from the tires. The smoke is bits of rubber coming off the tires’ outer layers.

Airplane tires are replaced individually and not as a set. So, airline companies have to pay close attention to the condition of the individual tires and maintain them accordingly. Although two tires may have been purchased and installed simultaneously, one tire may have worn out quicker than the other.

In a nutshell, there is no standard airplane tire size. Different airplane models must adhere to a specific set of standards set by the Federal Aviation Administration regarding their tires’ dimensions. However, you can tell the size of an airplane tire by looking at the imprinted numbers.

If you found this information valuable, make sure you let your friends know by sharing this article with them. Also, if you have anything else you’d like to add about airplane tires, I’d love to read about it in the comments.