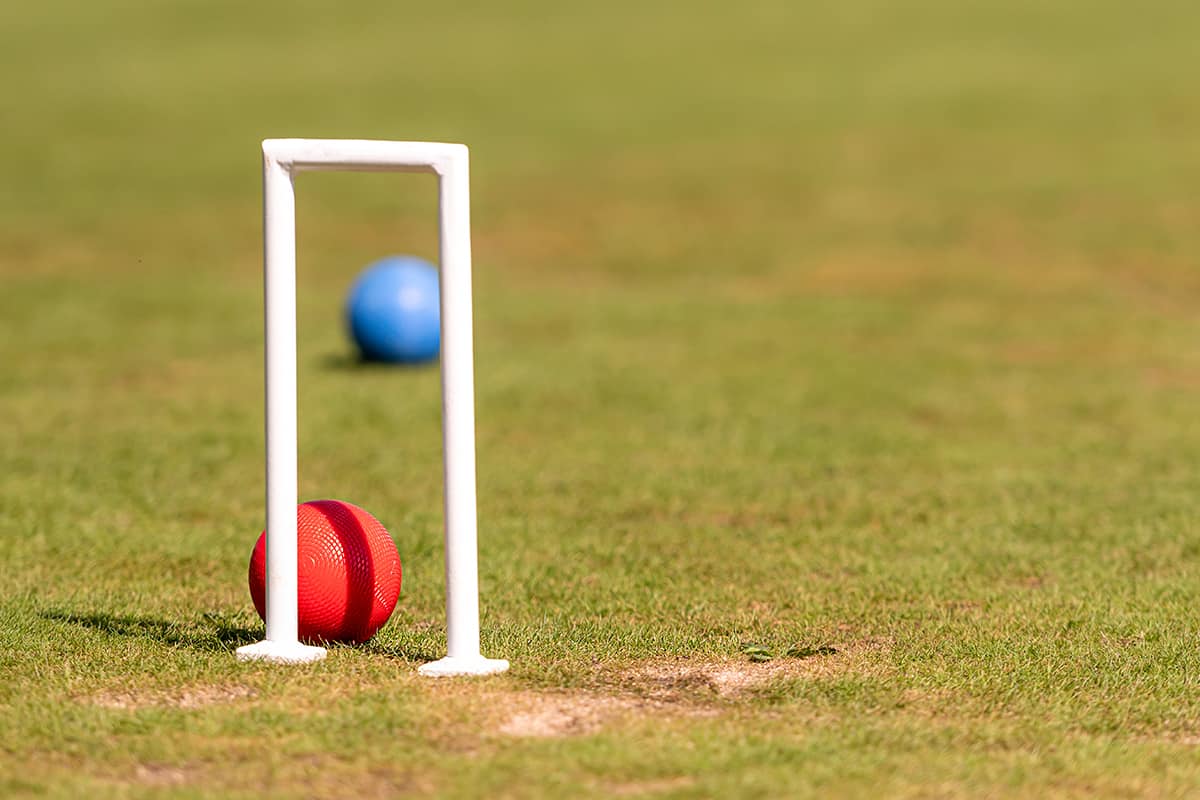 Do you remember hitting colorful balls through metal semi-circle rings with a long-handled mallet? That game actually has a name—croquet—and it’s an official sport with an official professional league governed by the Professional Croquet Association. But one thing you probably didn’t know is that croquet is played on a court.

A game of croquet will be played on a court of short grass (¼ inches or less), measuring 105 feet long and 84 feet wide. On ordinary grass (longer than ¼ inches), the court can be scaled down to the same 5:4 ratio, with the court usually measuring 50 × 40 feet.

In today’s guide, I’ll explore the sport of croquet in more detail and the specifications of regulation and backyard croquet courts.

A Quick Look at Croquet’s History 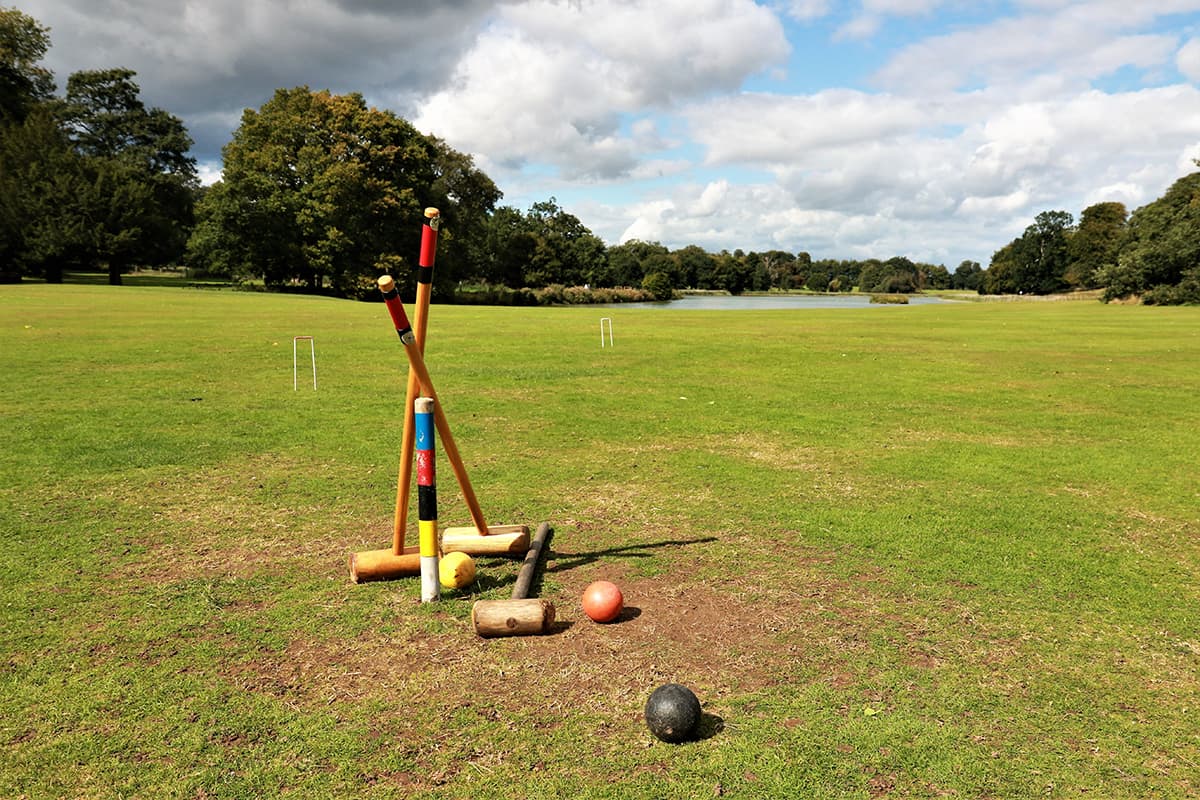 The origins of croquet can be traced back to France in the 11th century. However, the version of croquet we know today is believed to have come from Ireland in 1850. A year later, the game was brought to England, where it became a beloved sport that spread across the world.

Croquet is believed to have been derived from an ancient French sport called paille maille, which can be translated to Pall Mall or “ball” and “mallet.” The original rules of the game were rudimentary at best—you would hit a set number of balls with a mallet through iron arches. While similar to modern-day croquet, it would take several centuries of innovation before remotely resembling what we know as croquet today.

The first-ever croquet association, the All England Croquet Club, was established in 1868 in Wimbledon. Fast-forward roughly a century later, and the first association in the Americas called the United States Croquet Association came into being. After a brief period of inactivity, the association began governing the game at a competitive level, and in the 1970s, it became a full-fledged sport with prize money.

However, professional croquet, though a thing, won’t bring you fame and riches like other professional sports leagues. Depending on the league, the purse of an official croquet tournament consists of a fixed sum of money plus additional money per participant. Based on Pro Croquet Tour guidelines, the prize pool amounts to $2,000 plus $100 per player. According to Croquet World in 2006, the grand total shared among the 49 paid players amounted to roughly poverty-level salaries.

But croquet isn’t riding fancy cars and screaming fans. Today, it’s known more as a backyard sport, much like wiffle ball and ladder golf. A set of croquet supplies is fairly cheap on Amazon, so you and your family can enjoy a friendly round of croquet in your backyard to pass the time.

Dimensions of a Regulation Croquet Court 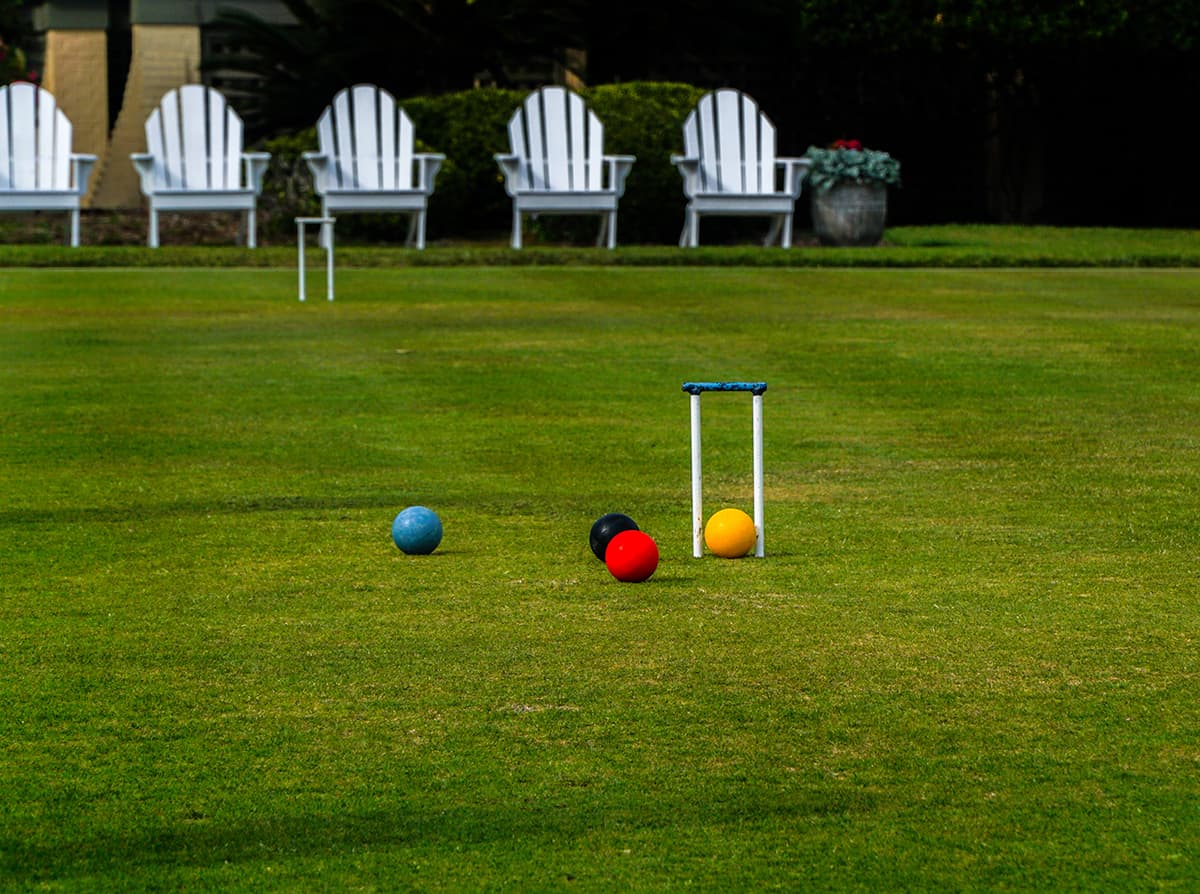 There are generally two ways you can set up a croquet court—based on league 6-wicket rules and based on generally accepted backyard rules for 9-wicket games. Let’s take a look at regulation courts first.

Before describing where the markings on a regulation croquet court are placed, let’s first familiarize ourselves with what they are.

Corner Flags—The flags that denote the corners of the court. Starting from the southwest flag in clockwise fashions, the corner flags are known as I, II, III, and IV.

Wickets—The arches or hoops that the balls must pass through in order to progress. There are a total of 6 wickets.

Starting Line—The line where all players begin the first hit. This is located 3 feet above the IV corner flag.

Penalty Line—The intersection point between the center peg and the east and west perimeter lines.

Center Peg—A peg that is placed at the very center of the court. The first player to pass the ball through all 13 wickets and hit the center peg is the winner.

Here’s a breakdown of the locations of the markings relative to a regulation 105-foot croquet court:

The dimensions of the court can be whatever you want. Ideally, it will be rectangular in shape and measure 100 feet long and 50 feet wide.

The markings in backyard croquet are similar to those of regulation croquet, but there are a few key differences that I will highlight below.

Center Pegs—Located on both ends of the court 6 feet in from the north and south boundaries.

Wickets—There are nine wickets in backyard croquet as opposed to just 6 in professional games. Wicket 5 is located at the exact center of the court.

The measurement and location of the markings are as follows: