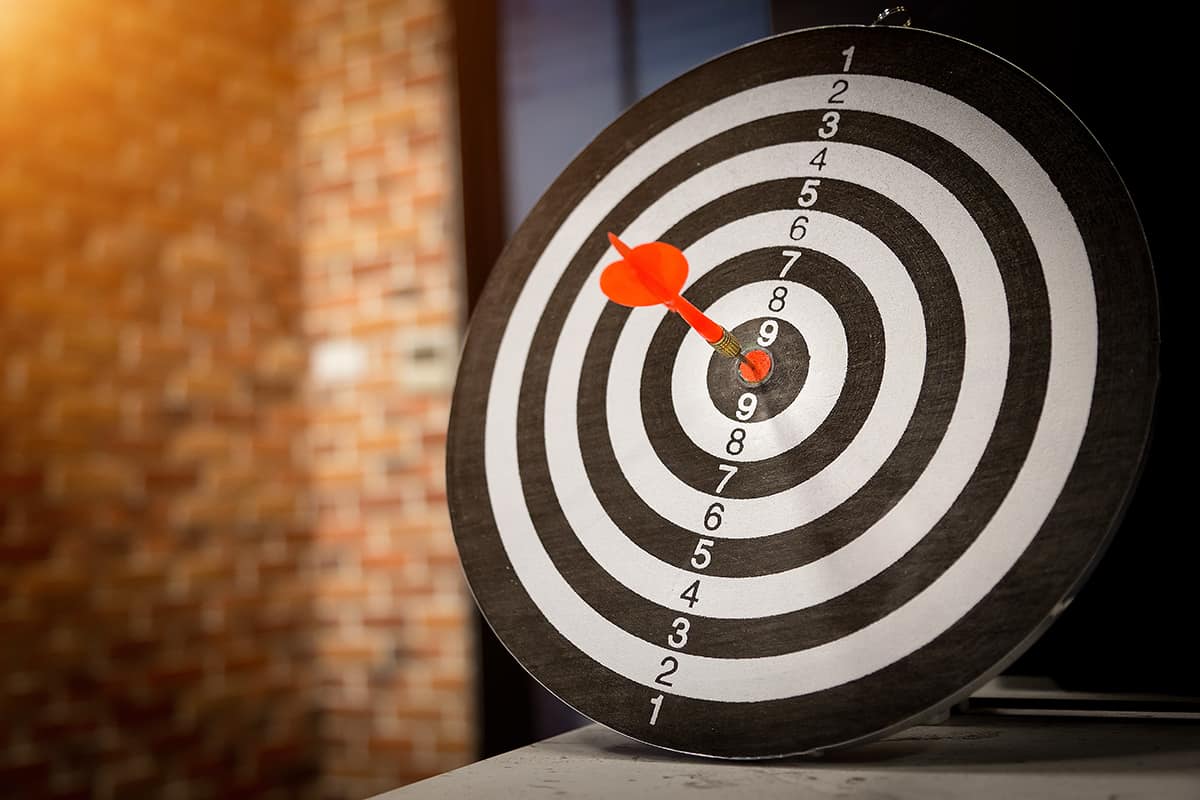 The contemporary game of darts can be traced back to the French. The game eventually found its way to the United Kingdom via a funfair, where people could gamble on their ability to throw multiple darts as accurately as possible at a wooden target.

The modern dartboard consists of multiple segments with assigned numerical values. The objective is to score below or over a certain number. Missing the board completely or causing the dart to bounce off of the board would result in a score of zero.

Today, there are multiple types of dartboards with numerous sets of rules. However, as a competitive sport, the Darts Regulation Authority (DRA), a non-profit organization that ensures good governance and integrity in darts, has set a standard size and ruleset to govern how the game is played on the international stage.

If you don’t have all day to sit around and read about the dimensions of a dartboard, allow me to give you a quick summary.

According to the DRA, a bristle dartboard must measure precisely 17.76 inches (451 millimeters) in diameter. 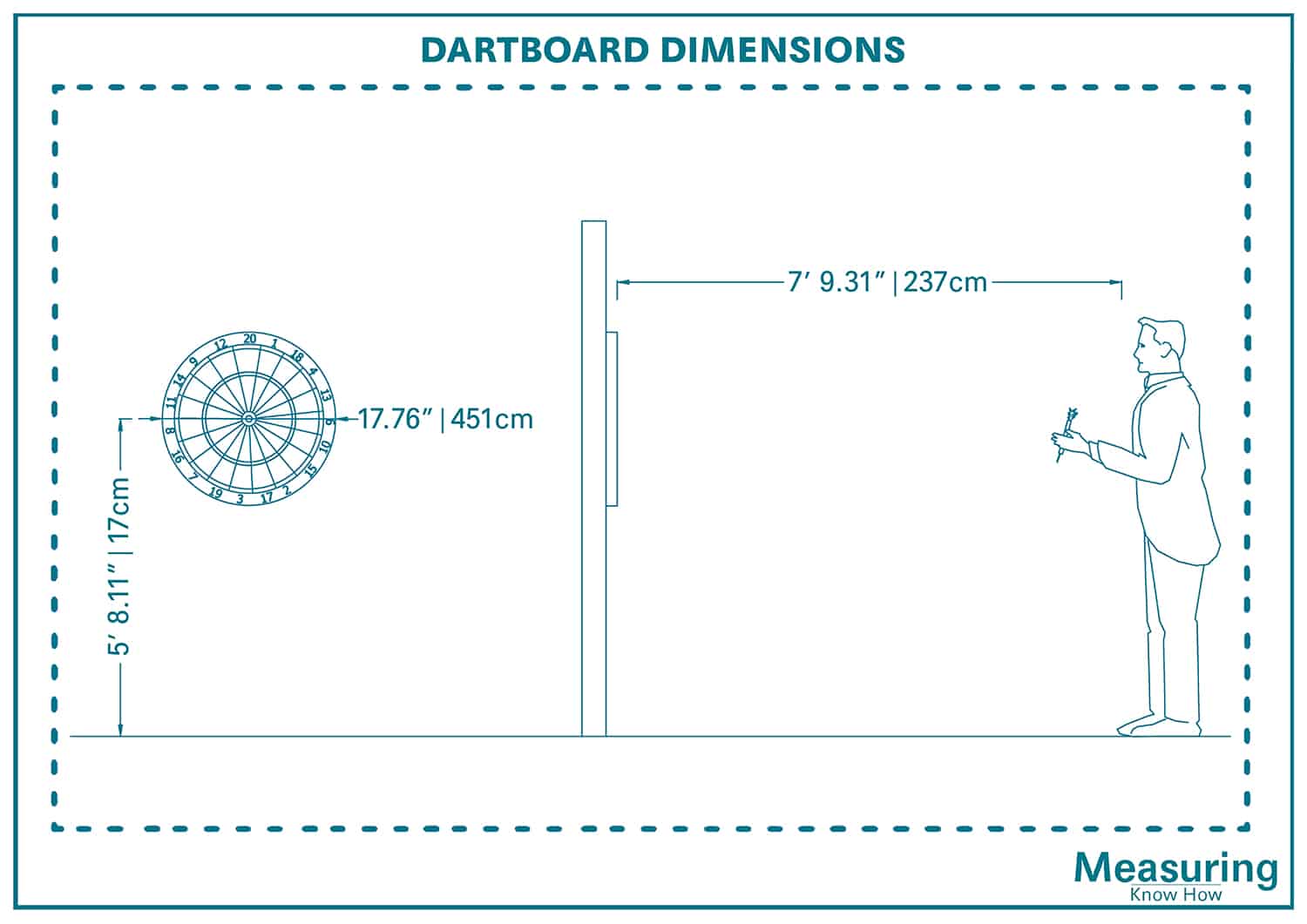 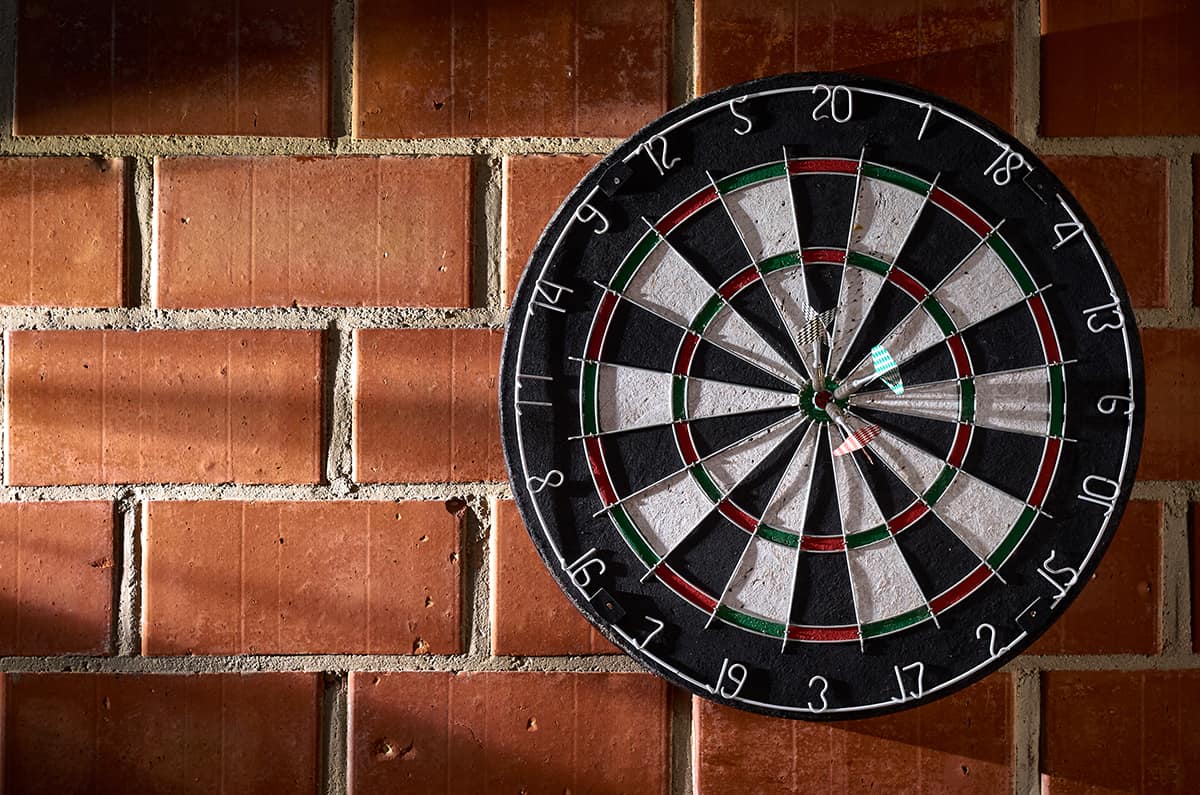 There are at least ten dartboard varieties to choose from. The most commonly used dartboard for competitive play is known as the Old London Dartboard or Clock Dartboard. You can instantly recognize it by the treble and double rings, as well as the double-bullseye market at the center.

While dartboards vary in numbering styles and appearance, they all follow the same size standards set by the DRA. Every dartboard used for competitive play must measure 17.76 inches (451 millimeters) across and 1.5 inches (38.1 millimeters) in depth.

Even though some organizers may promote their games as using 18-inch-wide (457 millimeters), they still use the same precise dartboard standards set by the DRA. 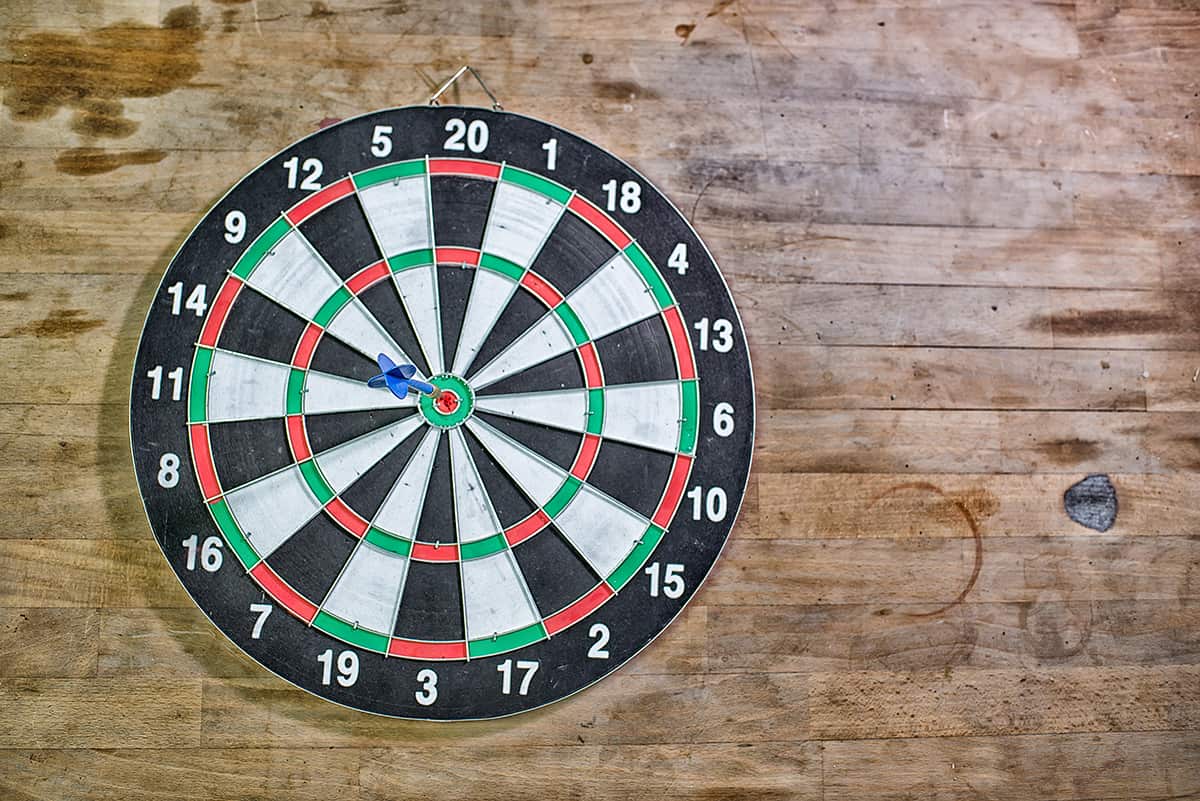 At the center are two circles of different colors. The larger circle measures 1.26 inches (32 millimeters) in diameter, and the smaller center, known as the bull, measures 0.5 inches (12.7 millimeters) across. 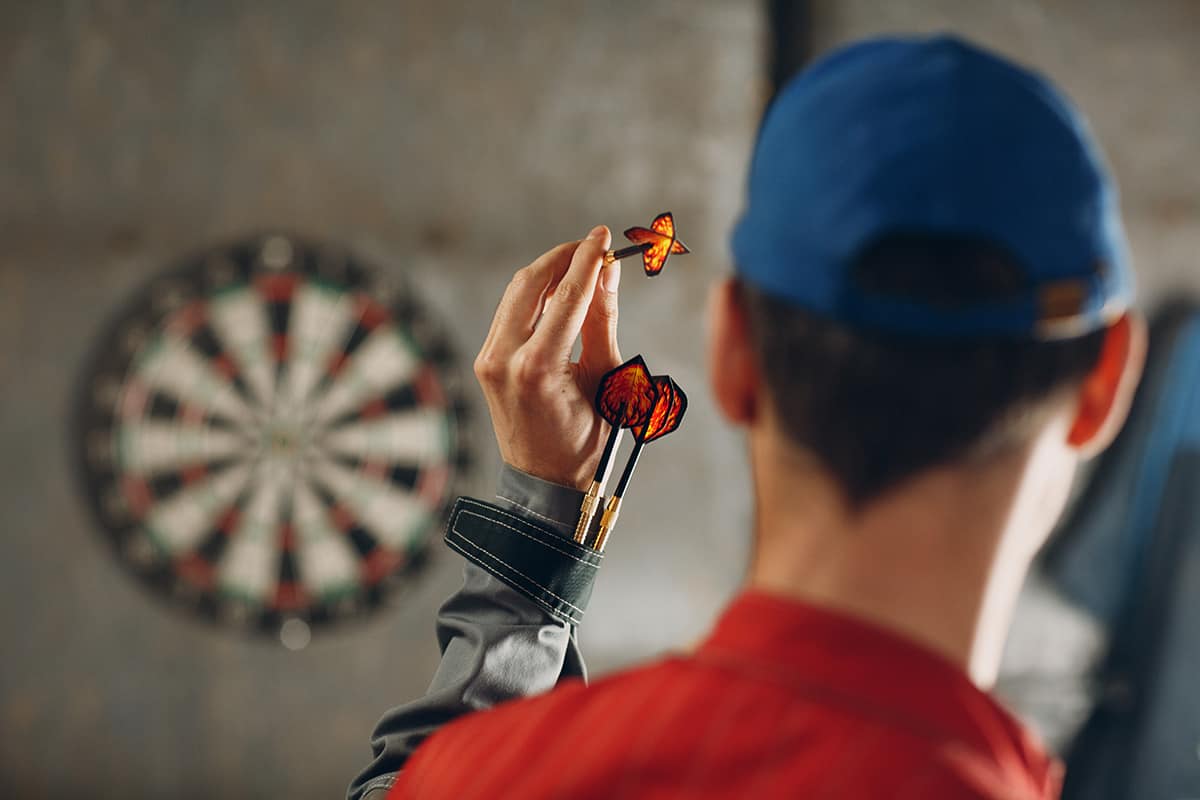 When setting up a dartboard for competitive play, the organizer must ensure that the number 20 is at the top of the board. The dartboard should be securely fastened to the wall so as to prevent it from moving as darts hit the board and players remove their darts from the board. 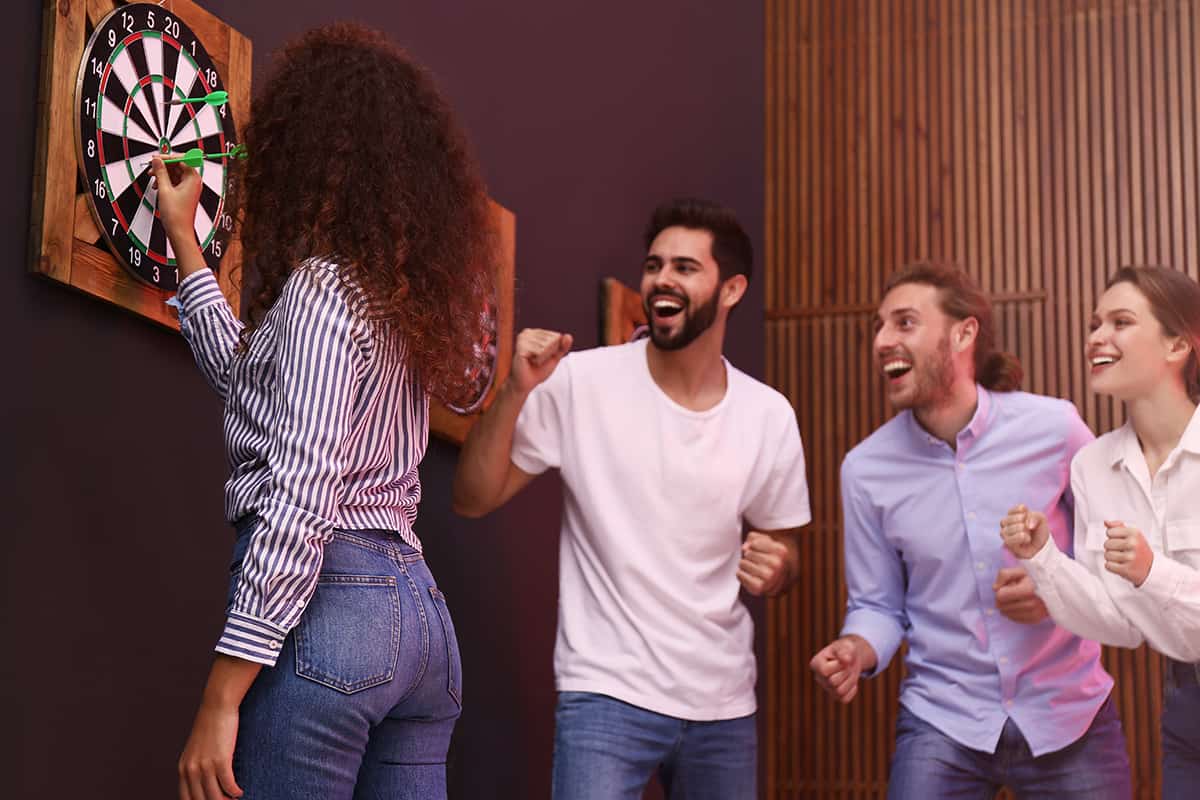 There are several varieties of dart games you can play, but for competitive play, people usually stick to 501 darts. You can check out the detailed guide to play 501 darts here, but essentially, the goal of the game is to reach a score of zero. One round consists of throwing three darts.

Each player or team starts with a score of 501. To begin subtracting points from their score, they must land a double-in, which means they have to land a dart in one of the double-ring sections. The highest score you can get per turn is 180, where the player hits the triple 20 scores.

During the final stages of the game, if a player “busts”—i.e., they score beyond 501—their score is returned to the original number at the start of the round. Please note that players don’t have to use all three darts during the final round.

2. How heavy are the darts?

Heavier darts throw straighter, whereas lighter darts may have a parabolic curve when players release them. If you’re thinking of getting into darts, try using darts of different weights to see which of them feels the most comfortable in your hands.

4. Can players lean over the throw line?

Yes, players are free to lean their upper bodies past the throw line, as long as their toe does not step over the throw line while maintaining balance. However, a darts player is not allowed to lunge forward while throwing the darts.

It can be if the players do not exercise caution while throwing and retrieving their darts. This is especially true for steel-tip darts since the steel can easily penetrate the skin. If someone as soft as a Nerf gun dart can cause serious eye injury, a steel or soft-tipped dart can certain be dangerous in the wrong hands.

So, even though there are several dartboard styles and rules to play the game, if you play competitively or even for fun at pubs, the dartboard has to be a specific size. Dartboards measure 17.76 inches across. There are multiple segments with incredibly particular measurements used for competitive games.

If you found this information valuable, or if you’re a general fan of darts, please let your friends know by sharing this on your social media. Also, we’d love to hear what kind of dartboards you use for competitive play or for fun at bars. Drop a comment down below!