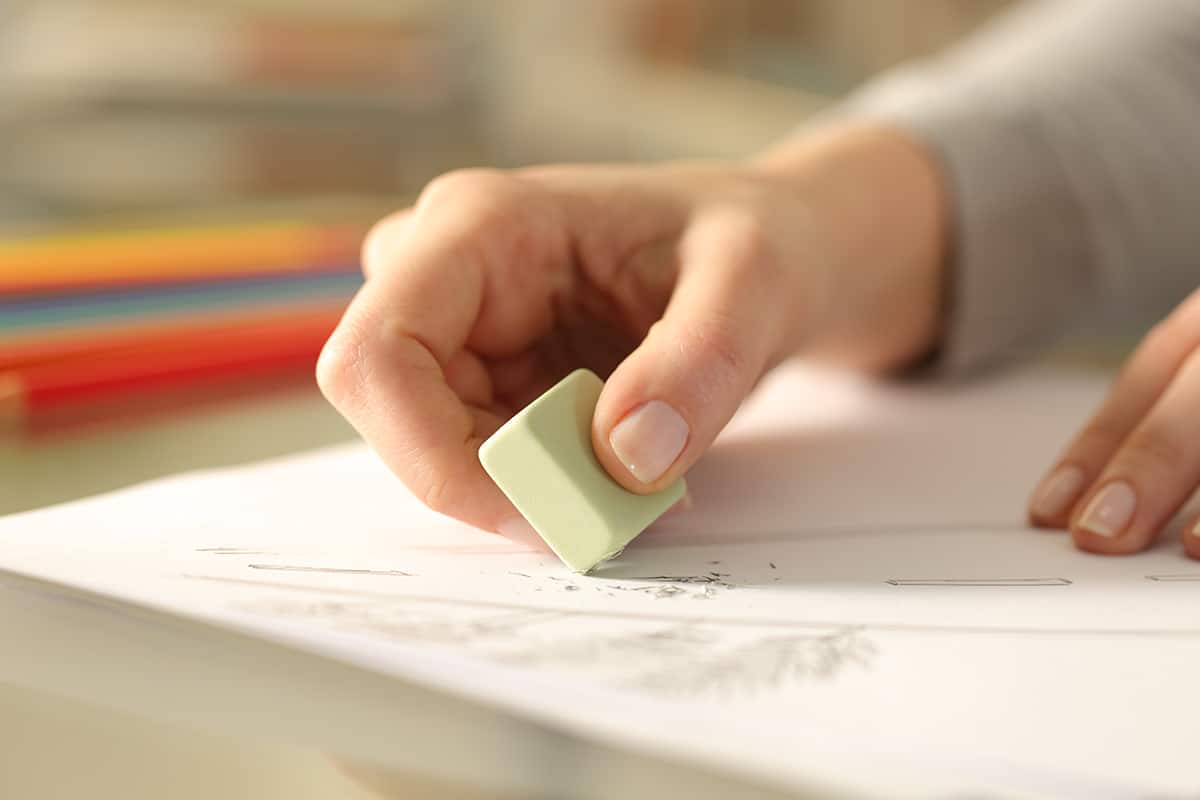 Everyone makes mistakes, especially when writing down notes at school. That’s why pencils come with erasers, right? But what if the eraser on the end of your pencil wears down? You can always use a separate eraser to wipe away any mistakes you make.

In this guide, I’ll share with you the different eraser sizes to choose from, as well as several facts about erasers you’ve probably never heard of before.

What Size Do Erasers Come in? 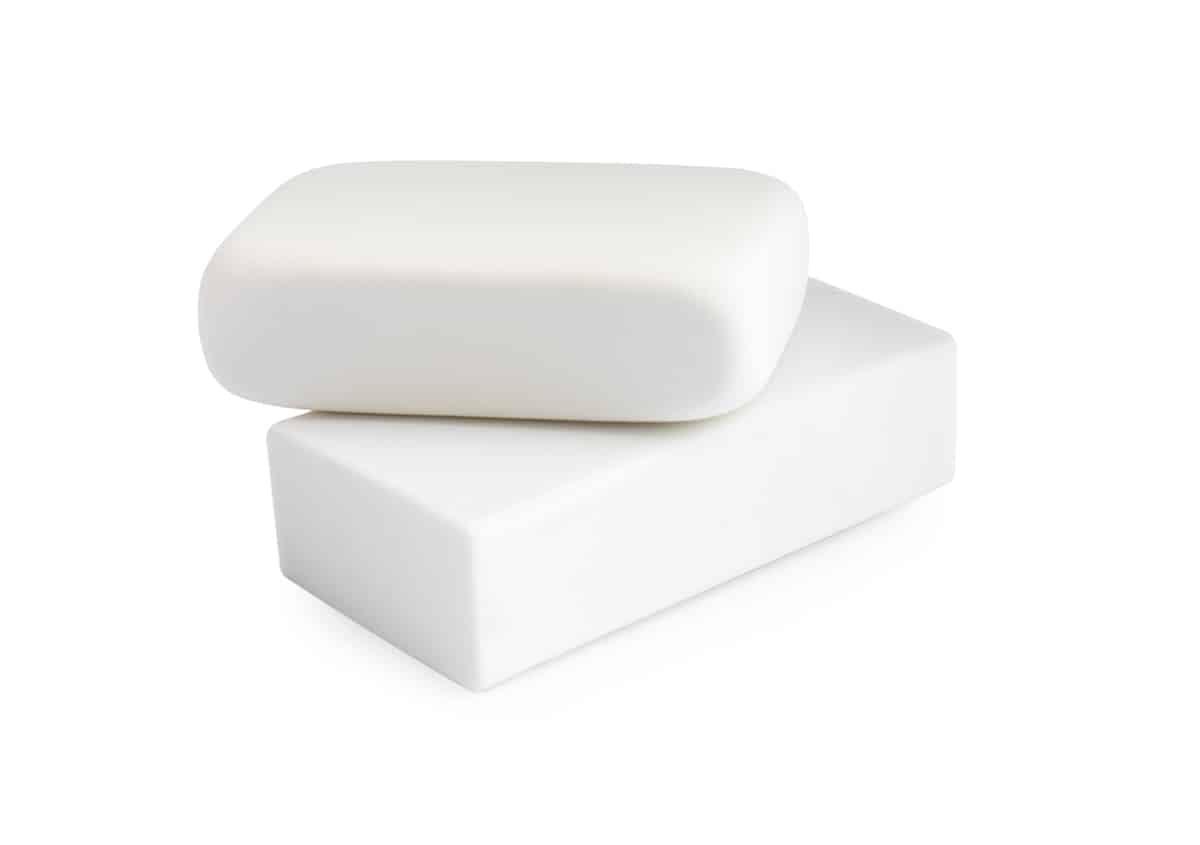 If you take a stroll down the aisles of your local office supplies store, you’ll probably come across dozens of eraser brands. Many of them will make erasers in different styles, where their shapes, sizes, and colors vary tremendously.

There is no standard when it comes to eraser sizes, which is why you might find one brand whose most basic eraser is considerably smaller or larger than the next. But on average, the typical eraser will measure somewhere around 1.8 inches in length, 0.7 inches in width, and 0.5 inches in thickness.

Now, one of my favorite erasers is the Giant Jumbo Pink Eraser for Big Mistakes. It’s comically large (5 × 2 × 1 inches) and makes for the perfect gag prank to give to a sibling. While it’s a gag product, it erases quite well, and some customers have claimed that the eraser has lasted them for several years.

Why Are Erasers Pink?

Almost across the entire board, you’ll find erasers coming in different shades of pink, including the jumbo eraser I described above. Why is that?

The answer is that the materials that go into erasers are what give them the iconic pink hue. Apart from rubber, erasers contain pumice, a volcanic rock that comes in various shades of white and red. Pumice in erasers gives them the friction they need to glide on the surface of the paper without ripping it to shreds.

And since then, the color has stuck. But since pumice comes in all sorts of colors, including neutral white, modern erasers can be any color of the rainbow.

What Does the Blue Part of an Eraser Do? 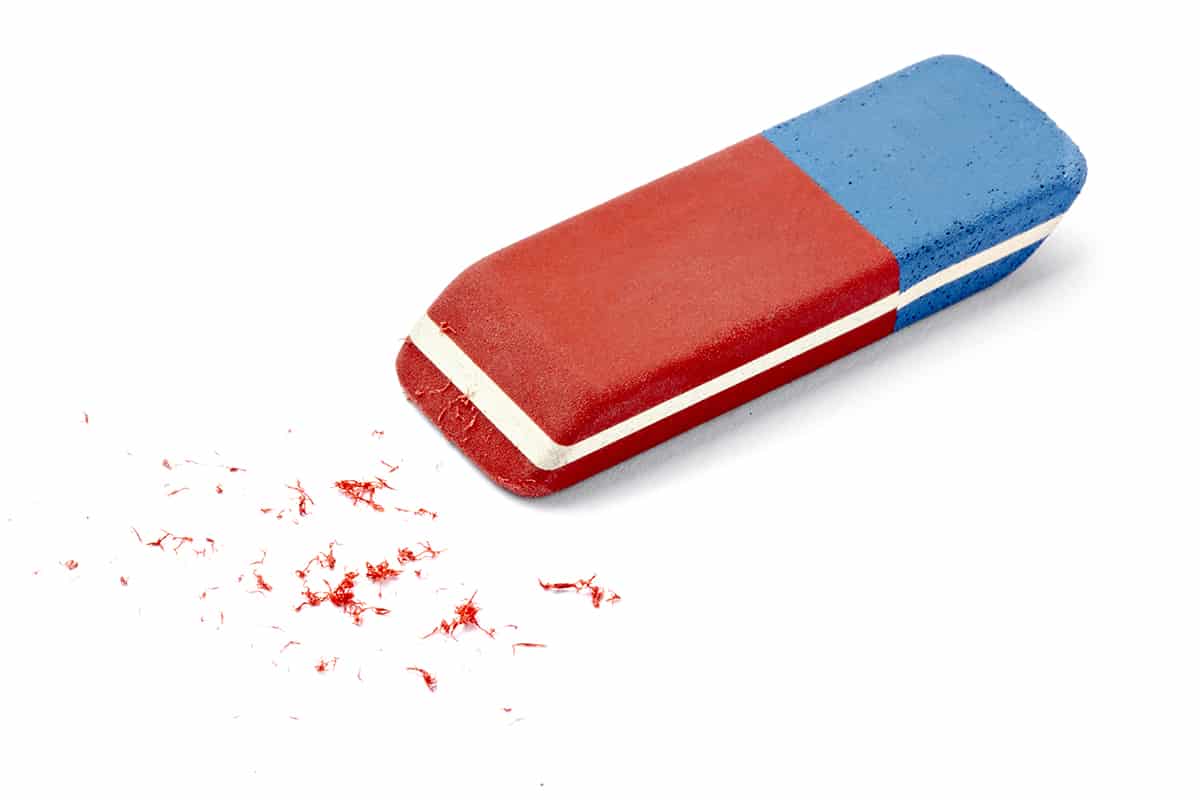 Some erasers come in two different colors—black/dark blue and pink/orange. Throughout our childhood, we’ve constantly heard that the darker side of an eraser is used to erase pen ink from paper? Is this true? Not even close.

If you carefully rub the darker side of the eraser, you’ll find that the surface is coarser than that of the brighter side. The coarseness allows it to erase pencil marks from thicker sheets of paper—i.e., cardstock and construction paper.

Art gum is known for its slightly gummy texture. It’s flexible and slightly translucent, and it absorbs graphite, which is why its shavings become darker when they crumble.

A pencil eraser is an eraser, usually made of vinyl, that is shaped like a pencil. You can sharpen one end to create a point, which makes it easier to erase lines in detailed drawings.

A rubber eraser is the type of eraser we’re most familiar with. It’s pinkish in color and is secured to the tip of your pencil inside the metal ferrule. They’re a lot firmer than gum erasers and can leave unsightly streaks on thin sheets of paper.

A vinyl eraser is soft, flexible, and usually bright in color. It’s the go-to eraser type for artists since it doesn’t leave pink streaks with every stroke.

A kneaded eraser looks sort of like silly putty. It’s made of stiff clay, and it doesn’t crumble. Instead, it absorbs graphite, which it retains until the entire putty eraser becomes darkened and unusable.

6 Facts About Erasers You’ve Probably Never Heard of Before

Now, let’s talk about some random facts about erasers that you won’t learn in school.

1. Did you know erasers were originally made of bread?

Before someone decided to mix rubber with pumice, people moistened balled-up pieces of bread in water to get rid of graphite marks on the paper.

There was plenty of bread to go around at the time, and it was fairly cheap to make and use as erasers. However, bread erasers had one huge downside—they would rot. You probably know what happens when you leave moist bread out at room temperature, right?

2. Modern erasers are made of vinyl

Engineers, architects, artists, and anyone who draws regularly will most likely find vinyl erasers to be their go-to option for getting rid of tiny graphite mistakes.

3. There’s such a thing as electric erasers!

Have you ever thought to yourself, “I need to erase these pencil marks, but I’m too lazy to move my hand back and forth?” If so, then you might want to check out electric erasers.

They sound imaginary, but they’ve been around for quite some time! I highly recommend checking out the Derwent 2301931, which runs on just two AAA batteries.

In the US, the slang rubber refers to something else that I won’t get into. However, for our friends across the pond, the word rubber is the unofficial name for erasers. This is because rubber was the main ingredient that went into every eraser back when the ancestor of modern erasers was first invented.

5. The invention of rubber was an accident

Edward Nairne, who has been credited for inventing rubber, claimed that it was a total accident. Legend has it that he meant to grab his trusty ball of moist bread, but he inadvertently took a piece of rubber and found that it wiped pencil lead on paper surprisingly well.

6. European pencils are, for the most part, eraser-less

For some strange reason that goes beyond basic human understanding, manufacturers in Europe don’t attach erasers to the tips of their pencils. There really is no rhyme or reason to this, seeing as how erasers and pencils go hand in hand. Some have argued that European pencil manufacturers do this to reduce production costs, but c’mon!