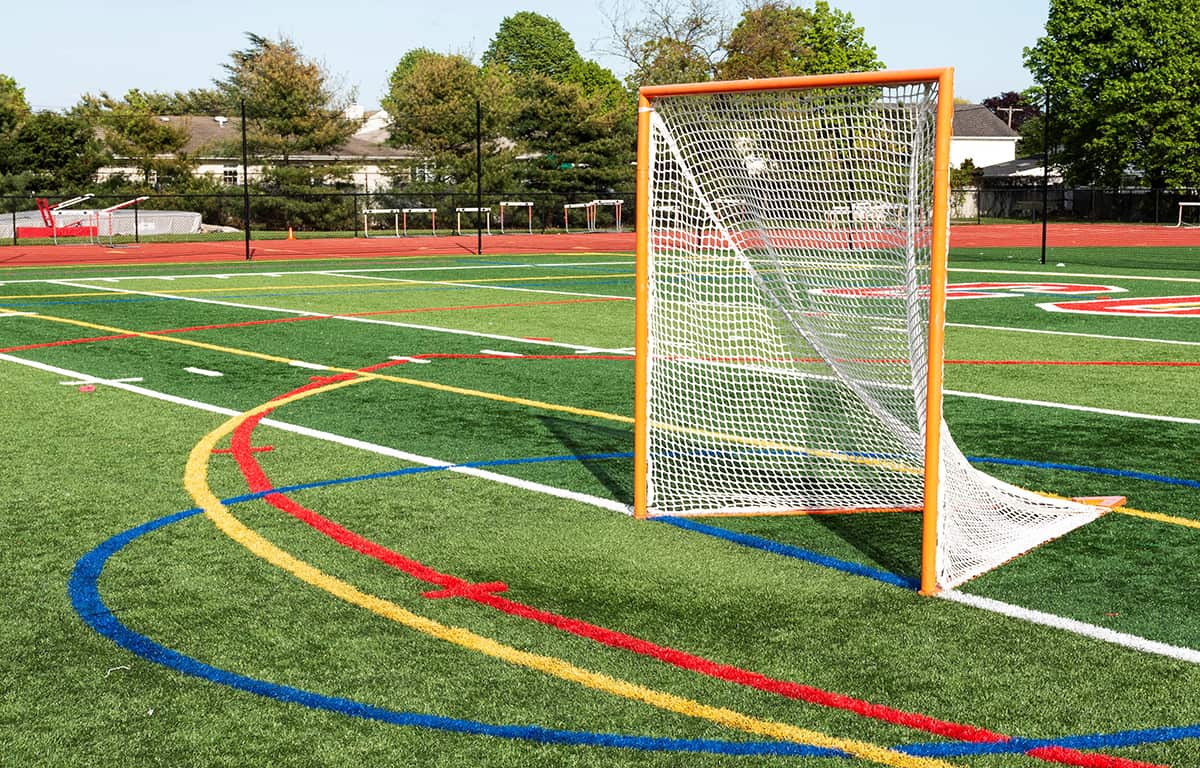 Lacrosse isn’t as popular a sport as basketball, football, and—for some reason—baseball. Similar to football, there are all sorts of equipment that you must prepare to play a lacrosse match, one of the most important of which is the goal. So, how large are lacrosse goals?

But that’s not the only thing you should know about lacrosse fields and equipment. In this guide, I’ll explain the equipment and field specifications in lacrosse in detail. 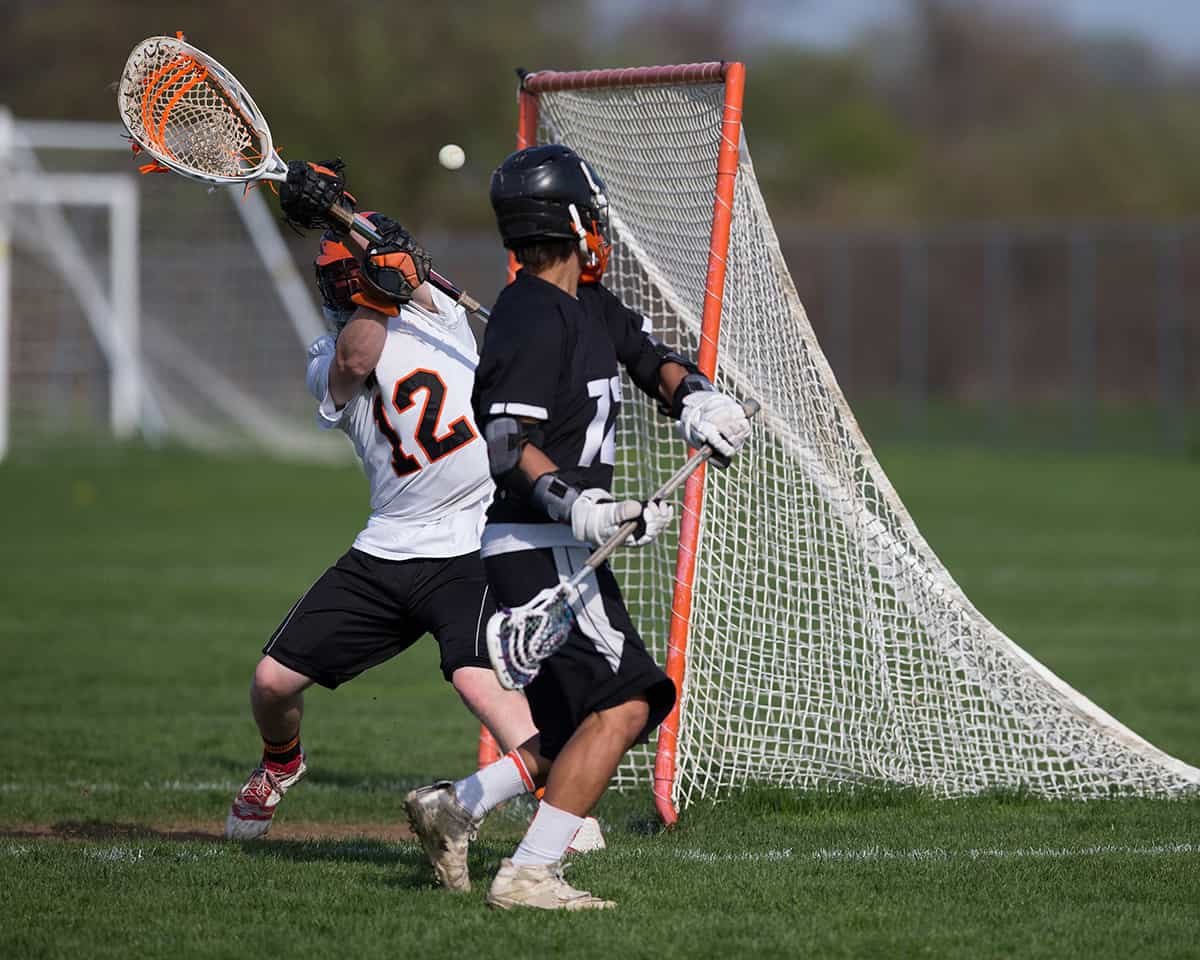 Lacrosse is a team sport that is played on an open field. 2 teams of 10 members—1 goalie, 3 defenders, 3 midfielders, and 3 attackers—duke it out on the grass to see who can score more goals in the other opponent’s net.

The history of lacrosse can be traced back to the Native Americans, specifically those that inhabited the Great Plains and southeast Canada. The earliest records of lacrosse, which was simply known as stickball, were dated back to the 1100s. The sport was used as a means for settling disputes, turning boys into men, as well as practicing religion. Lacrosse, which simply means stick in French, was used by missionary Jean Brébeuf when he witnessed Iroquois athletes in the 1630s.

It wasn’t until the 1800s that lacrosse was adopted by the Western World when universities all over Canada built their own teams. Lacrosse was eventually added to the Summer Olympics in 1904 and 1908, with Canada taking home the gold in both years against the US and Great Britain, respectively.

During the Summer Games in 1928, 1932, and 1948 games, teams from all three countries exhibited lacrosse matches, but the Olympics officially removed the sport from its event roster. However, there is a chance that the sport might make its way back into the Olympics in 2028.

Today, the sport is governed by World Lacrosse, which oversees and regulates competitive lacrosse competitions held by the Premier Lacrosse League in the United States and Aleš Hřebeský Memorial Tournament in Europe.

The equipment used in lacrosse is similar to those in football and soccer. As a contact sport, lacrosse can get pretty rough, and as such, players must wear protective padding to protect the most delicate parts of their bodies from injury.

However, to play a friendly game of lacrosse, you only need 4 things—a lacrosse ball, lacrosse sticks, goal posts, and a field.

We’ll take a look at the 4 in more detail down below. 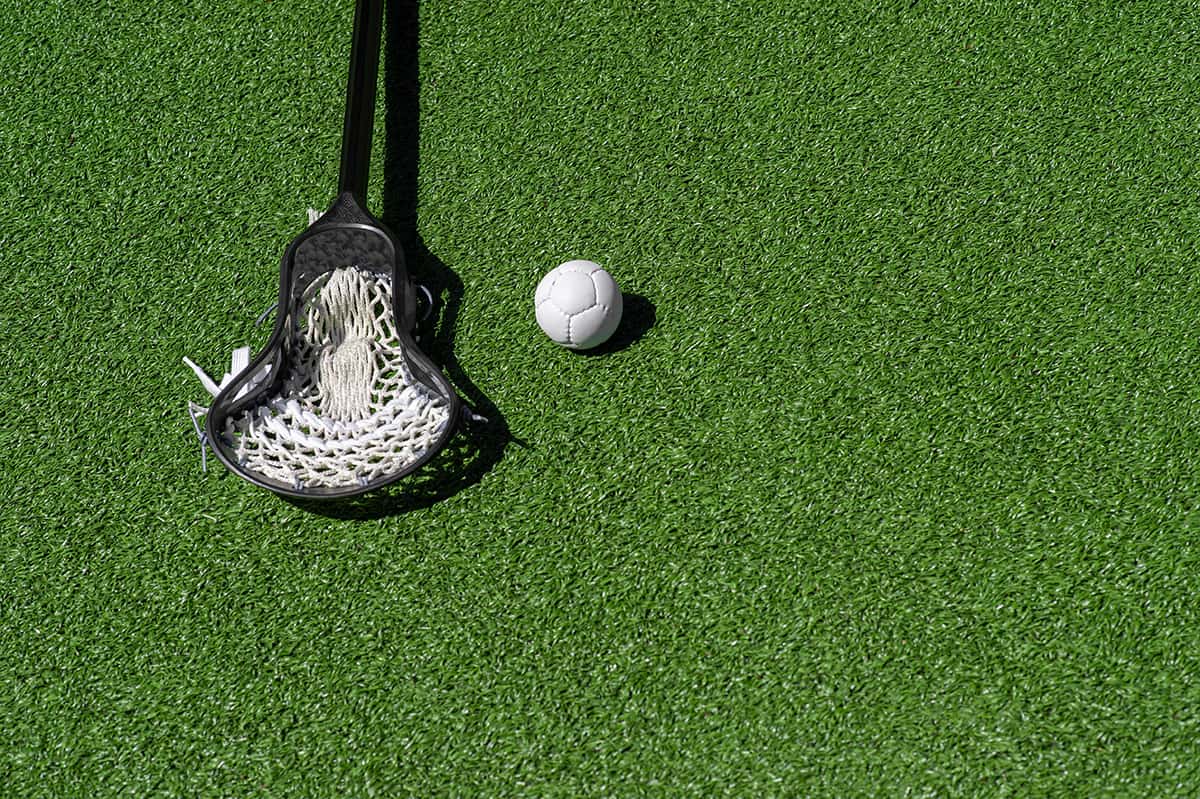 The point of the game is to shoot the lacrosse ball into the opponent’s net. The more times you do this, the more points you earn (1 point per legal goal). The team with more points is deemed the winner of the match.

A lacrosse ball must be made of rubber. It should also be white or orange in color and measure 7.75 inches in diameter and 8 inches in circumference. The ball must weigh between 5 and 5.25 ounces. When dropped from 72 inches above a wooden surface, it must bounce between 45 and 49 inches high. 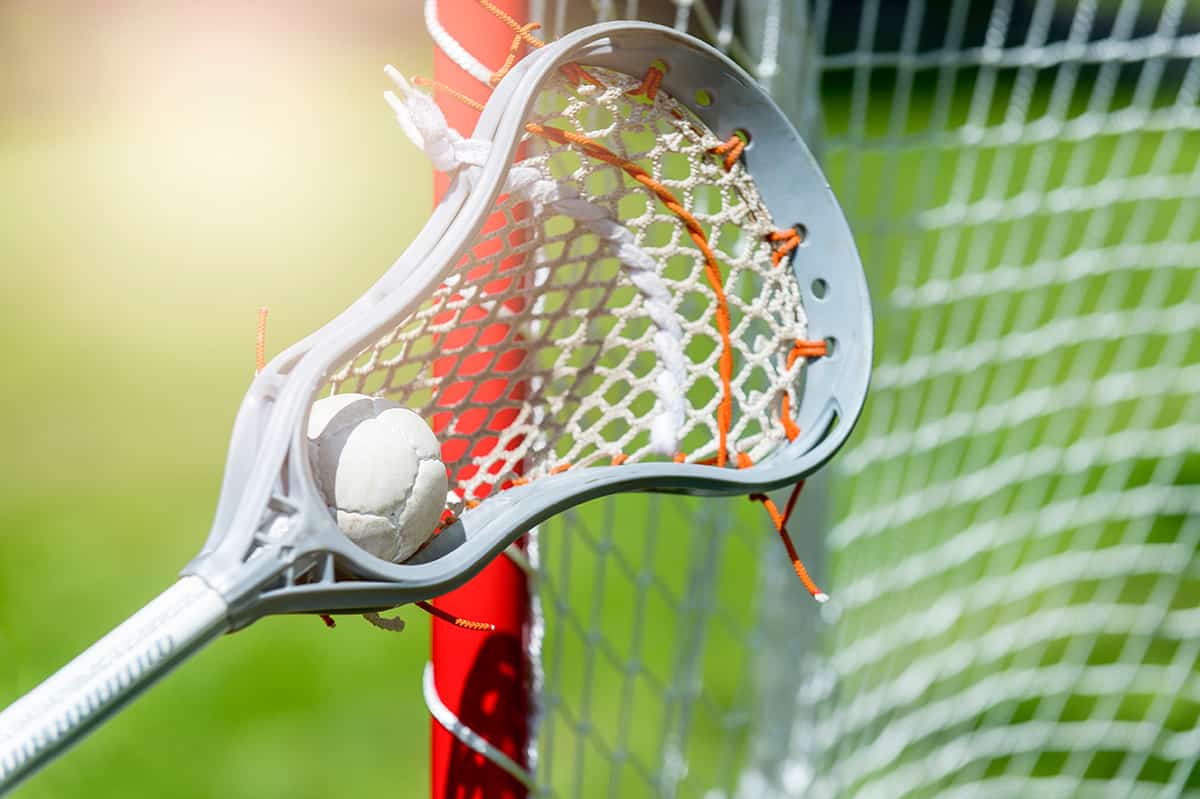 Lacrosse sticks, also known as crosse (which means stick), are long-handled tools that players use to handle and shoot the ball, as well as check opponents. A crosse is comprised of 3 major parts—the shaft or handle, the scoop, and the pocket (net).

There are 4 different types of lacrosse sticks used by the different player positions. Attackers use attack sticks, defenders use defensive sticks, midfielders use midfield sticks, and goalies use goalie sticks. Each type of stick is a different shaft length and scoop diameter. Usually, the defensive players—i.e., the defenders, midfielders, and goalies—will use longer sticks to interfere with their opposition.

Lacrosse goals, also known as field goals, are made up of plastic or metal poles. It has a square opening and a rectangular base. There is also a net in the back portion of the goal post, not unlike those used in ice hockey.

The opening of the goal post is made with 2 vertical poles with a horizontal crossbar connecting the two at the top. All 3 of these components measure 6 feet long to give the goal post a 6-foot square opening.

So, the overall dimensions of a lacrosse goal are 6 feet wide, 6 feet tall, and 7 feet deep. These dimensions are in line with the World Lacrosse’s rulebook for men and women. 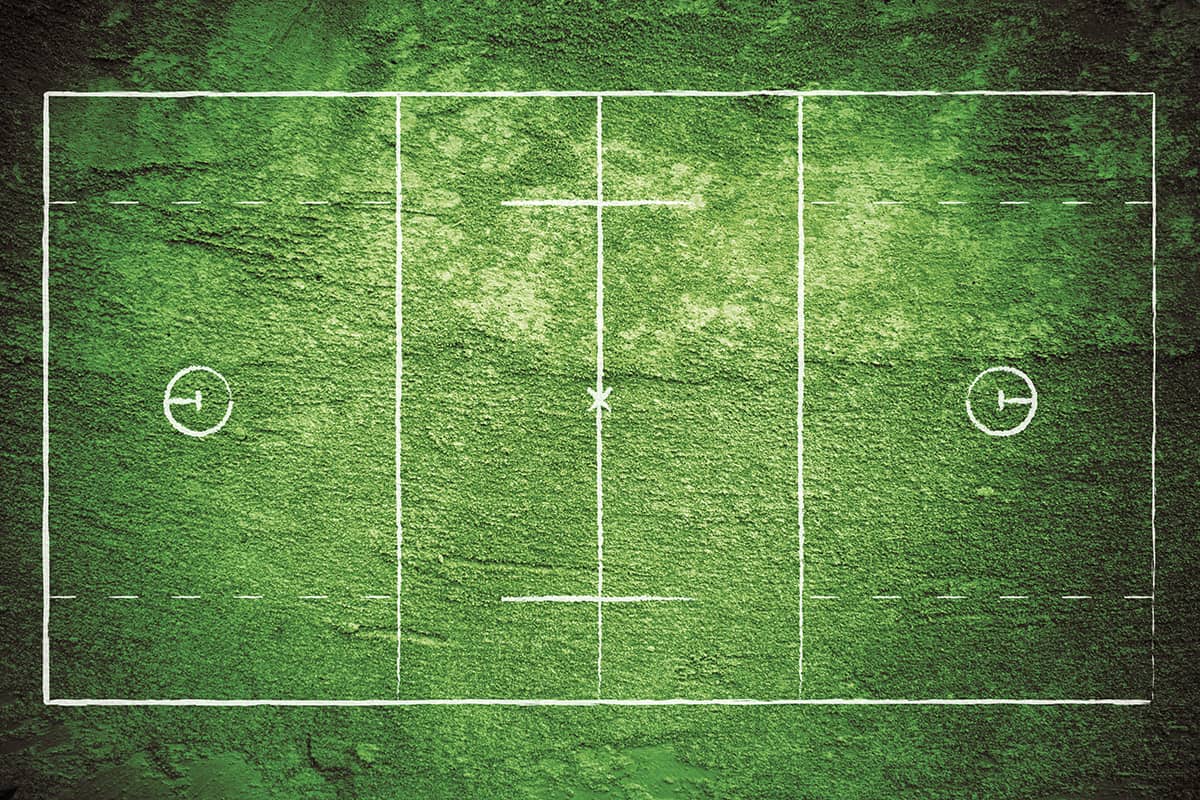 The playing field used for lacrosse measures 110 meters (360 feet) long and 60 meters (196.85 feet) wide in both gender categories. Similar to other sports, you can find all sorts of markings on a lacrosse field, which I’ll explain below:

Playing Field Boundaries—The lines that define the 110 × 60-meter playing area of a lacrosse field. The sidelines measure 110 meters, and the end lines are 60 meters long.

Center Line—The line that divides the field into 2 equal halves that measure 55 × 30 meters.

Crease—The crease is defined by a 6-meter-wide circle. It is located 12 meters from the ends of the court for each team. Inside the crease, the goalie can use a hand to bat the ball out of the crease. The goalie may leave the crease to pass the ball or intercept a player.

Restraining Lines—These lines are drawn 18 meters in from both ends, spanning the entire 60-meter width of the playing field. Attackers are not allowed to pass the restraining line on their side of the field. The line is also used to determine offside balls.

Goal Line Extended—The GLE are invisible parallel lines to the goal. It is used as a reference for repositioning the location of the ball after a penalty is called.