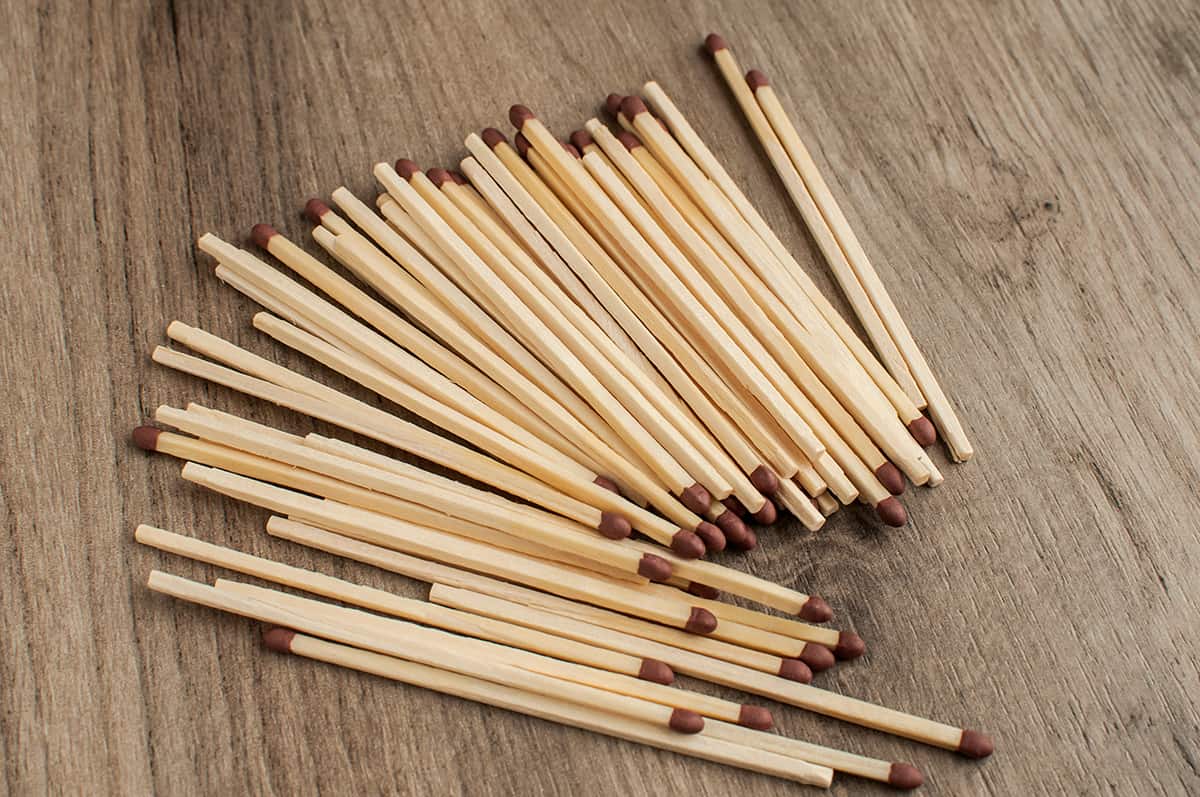 Whether you find yourself in the middle of a backyard barbecue or stranded on a desert island, you better have a box of matches with you. But just how large is a single matchstick?

In this guide, I’ll explain the different types of matchsticks, their measurements, and how matches compare to lighters.

A Quick Look at the History of Matches 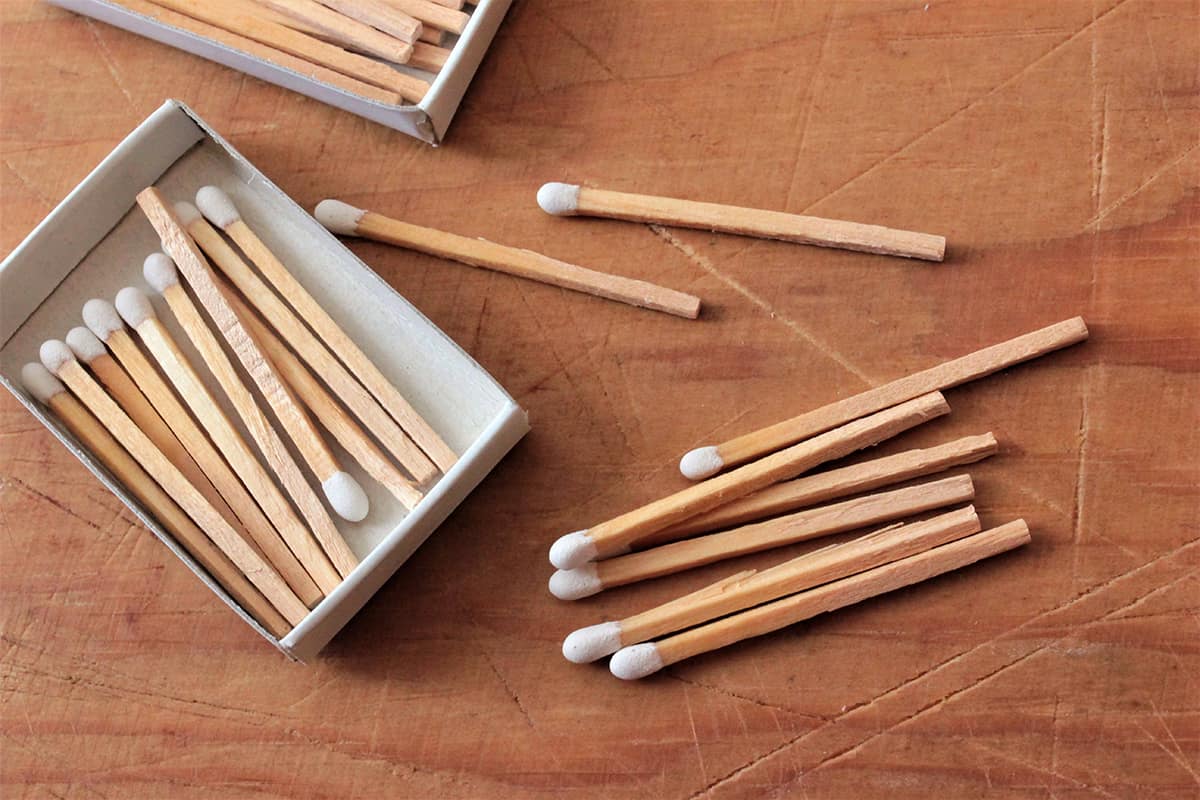 The technique of striking sulfur against an abrasive object to create fire has been around for several hundred years now. The first time a sulfur-based self-igniting matchstick came into being was in the 1820s, when John Walker, an English chemist, tested different chemicals and rubbed them against sandpaper.

John’s first matchsticks were initially made of cardboard and were marketed as “Friction Light.” After swapping cardboard out for hand-shaped wooden splints, he sold them in tiny boxes with a sheet of sandpaper on the side. He decided to forego patenting Friction Lights, so the design was taken and tweaked by Samuel Jones and patented under his name.

This type of matchstick needs to be struck against an abrasive surface, such as sandpaper or the sheets or match striker sheets. Striking the head against another object will not create enough friction to ignite the head.

The head of a safety matchstick is made of potassium chlorate and sulfur. The potassium chlorate works by introducing oxygen into the immediate area around the match head, allowing a tiny initial spark to grow into a large flame.

A strike-anywhere match will catch fire when rubbed against any hard, rough, dry surface. While a matchbox containing strike-anywhere matchsticks will usually come with a striker sheet on the side, you can cause the head to ignite by swiftly striking it against a rock, a wooden board, or even a red clay brick.

The sulfur found in a strike-anywhere match comes in the form of tetraphosphorus trisulfide, which catches fire more easily than the sulfur in safety matches.

What Are the Matchstick Sizes? 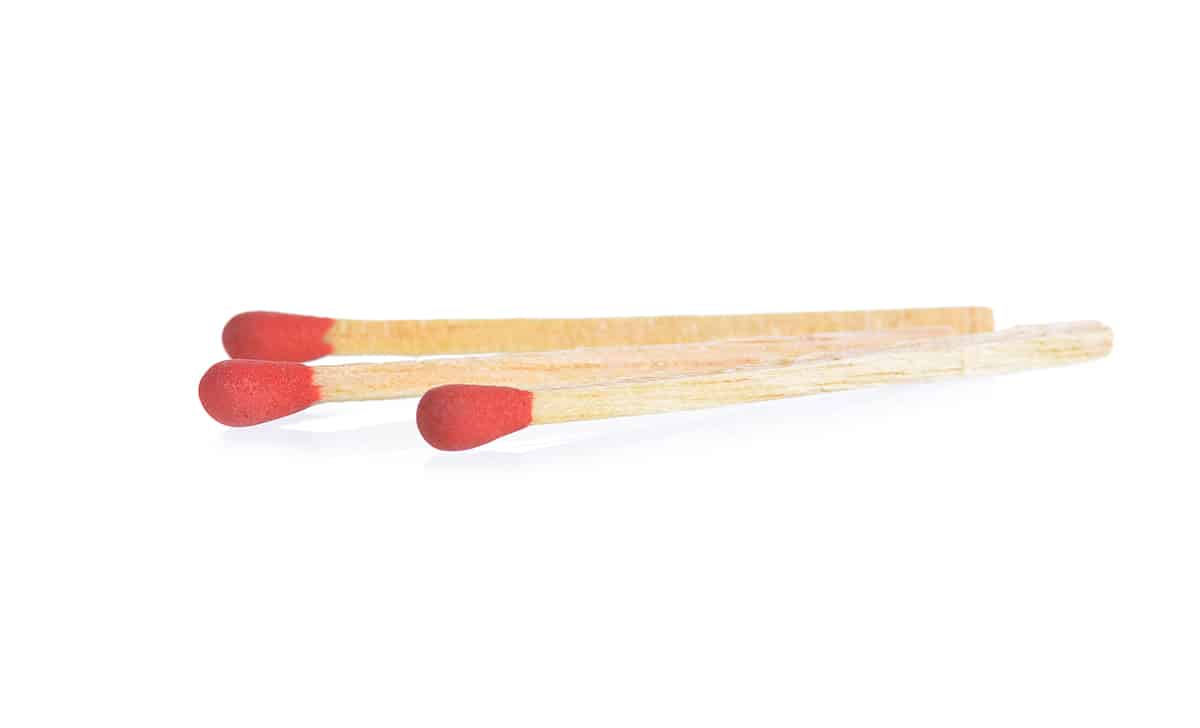 The standard matchstick will usually have an overall length—from the bottom of the handle to the top of the match head—of 61.2 millimeters (2.41 inches).

The handle will measure about 2.5 millimeters (0.10 inches) in diameter or on all four sides if it is rectangular in shape. The head will usually stick out 4 millimeters (0.16 inches) on top of the matching handle and measure 3.7 millimeters (0.15 inches) wide. 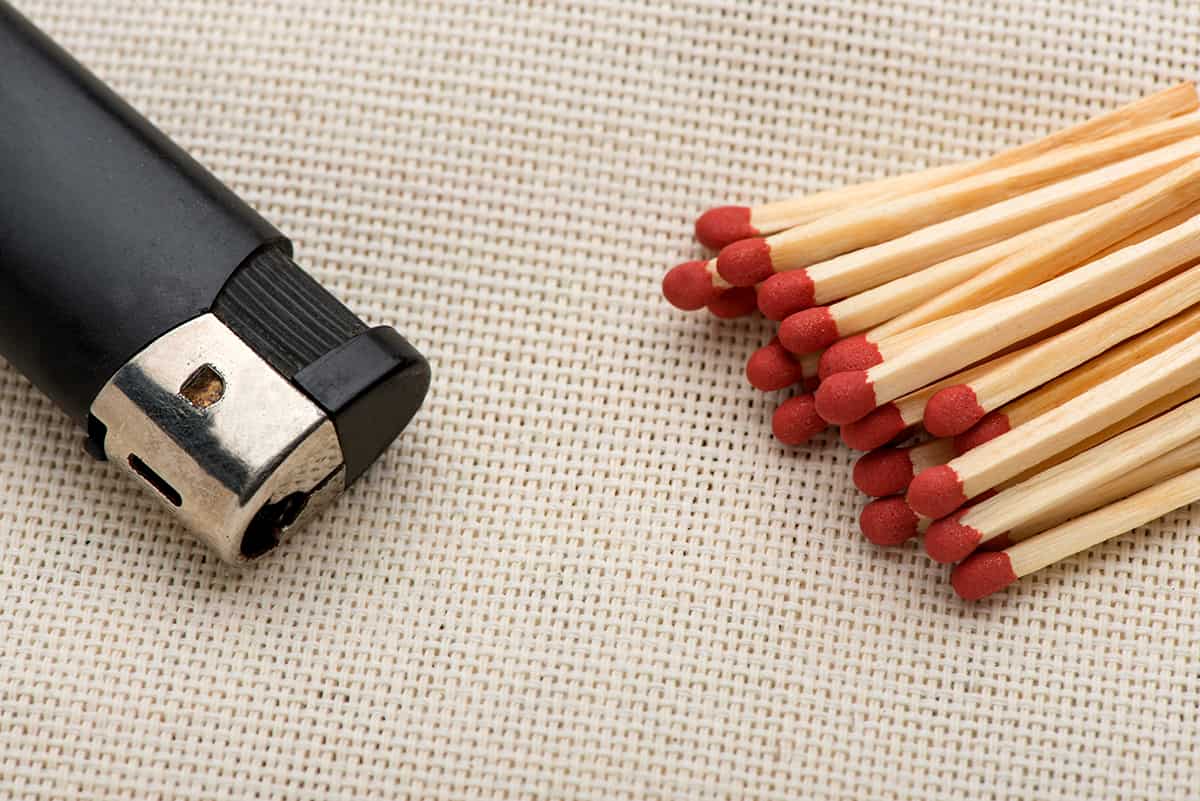 So, how do matches compare to lighters? It depends on how you look at it. They are both used for creating fire from seemingly out of nowhere. But is one objectively better than the other?

While neither is a toy, matches, and lighters can be incredibly safe when used in the right person’s hands. Igniting a match or a lighter requires a multi-step process to prevent most children from razing their homes.

However, the same cannot be said for strike-anywhere matches. Since these matches will ignite with struck against any hard, dry surface, anyone, including kids, may accidentally cause a raging fire with minimal effort.

Matches are, by far, the more eco-friendly option when compared to lighters. Apart from the chemical-laden portion of a match, which makes up roughly 6% of a matchstick, the wood splints used to construct matchsticks are 100% biodegradable. Although it can take a while, the carbon dioxide released from wood can be absorbed by surrounding trees.

Even though wood from felled trees is used to make matches, lumber-supplying companies continuously regrow their stock, so there is never a shortage of trees for printing paper, matches, or other mass-produced wood-based products. Also, a single tree can make about 1 million matches, which means 3,333 matches per 300-match matchbox.

Lighters, on the other hand, are almost completely made out of plastic and metal parts, which are not very biodegradable. Long-lost lighters can take up to 450 years to decompose.

A single standard-sized BIC lighter can last up to 3,000 ignites or up to 1 hour when the fork is depressed continuously. Matches, on the other hand, can stay lit for up to 1 minute. So, a 300-matchstick box will provide flames for up to roughly 300 minutes.

There’s no denying that lighters, especially electric lighters, are much easier to use than matchsticks. If the first depress of the lighter’s fork doesn’t create a fire, the second or third should. If you accidentally snap a matchstick while striking it against the strike sheet, you might have to fish out another stick from the box, rapidly depleting your matchstick count.

Can I Make My Own Matchsticks?

Yes, you can, but it’s not very cost-efficient nor a quick process. This guide explains how making matchsticks can cost you $50 and take up to 5 hours. So, if you find yourself on a desert island with an oven at your disposal, the following DIY matchstick guide won’t be of much help.

Step 1—Get your hands some potassium chlorate.

Step 3—In a mixing bowl, combine 3 parts glue to 1 part potassium chlorate and mix until it creates a stiff paste.

Step 4—Dip one end of a toothpick, wooden split, or dowel into the potassium chlorate mixture.

Step 5—Remove the toothpick, wooden splint, or dowel from the mixture and set it aside on a wire rack.

Step 6—Preheat your oven to 150°F and wait for the oven to come up to temperature.

Step 7—Insert the wire rack and the DIY matchsticks into the oven and bake for 120 minutes.

Step 8—In a mixing bowl, combine red phosphorus with Elmer’s Glue (1:3 parts) and set aside.

Step 9—After baking the matchsticks, remove them from the oven and allow them to cool before dipping the match head side into the red phosphorus mixture.

Step 10—Bake the matchsticks again at 150°F for an additional 120 minutes.

Step 11—Try striking the matches on a rough, dry surface.