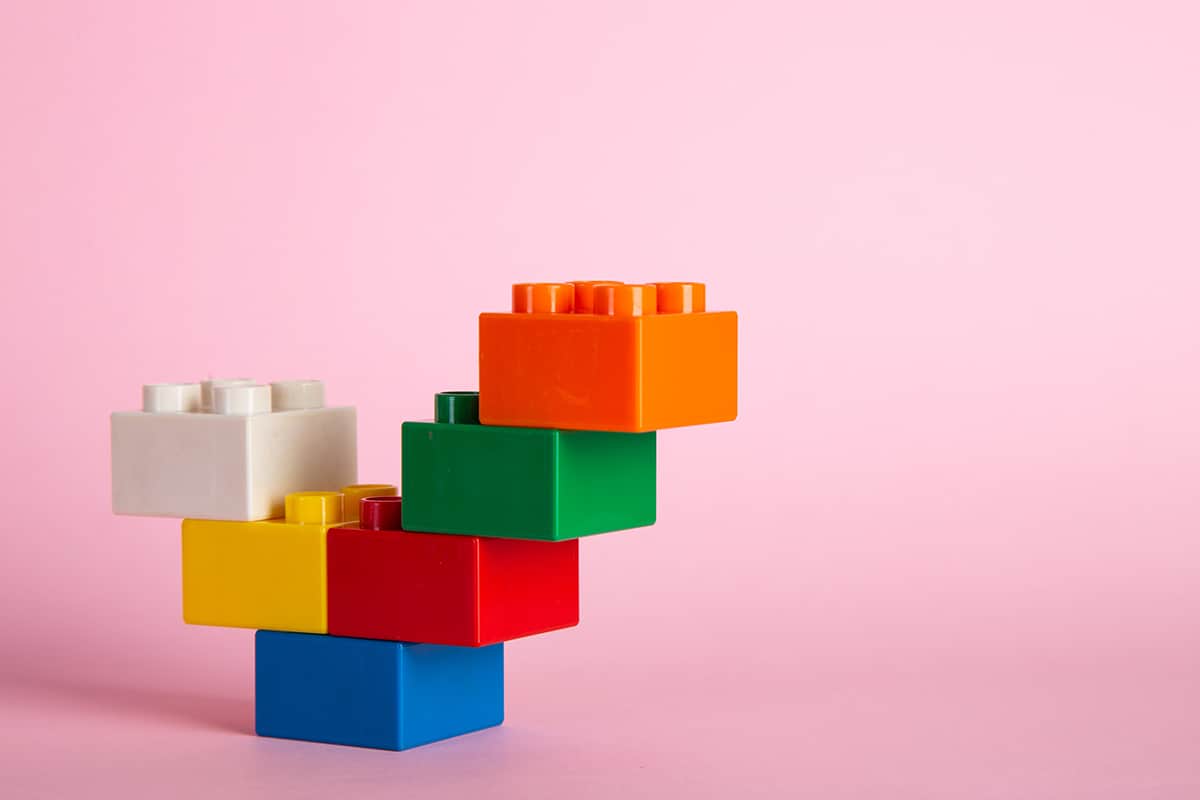 Do you remember playing with Lego bricks when you were a kid? Many of you guys probably still play with Lego because, well, they’re fun to play with! But have you ever thought about what different sizes they come in?

Believe it or not, there is still so much to learn about Lego brick sizes, especially regarding their highly specific measurements. In this guide, I’ll explain in more detail what a Lego brick is and how it compares to other Lego pieces, as well as Lego brick measurements.

What Is a Lego Brick?

If you unpack a box of Lego blocks right now, you’d most likely find more bricks than you would other pieces. The general understanding of a Lego brick is that it refers to any Lego piece, though this definition is somewhat untrue.

A Lego brick is an element that measures 3 plates or more (more on plates later) thick. It should be rectangular in shape (in most cases) and have at least 1 stud on top and 1 socket on the bottom.

According to Brick Architect, there are over 3,700 types of unique Lego bricks. Many of them may look the same, but even slight differences in shape, thickness, and stud design will separate 1 part and its code number from another.

Now, here’s a quick rundown of the most common Lego brick sizes. Their numbers refer to how many X and Y-axis studs and sockets they contain.

Before we dive into the measurements of a typical Lego brick, we first need to understand certain vernacular.

Stud = the protruding parts on top of a Lego brick that connects with sockets.

Socket = the empty portion of the underside of a brick in which the stud is inserted to connect blocks.

With that out of the way, it should be easier to understand the measurements of a Lego brick. In this example, I’m going to use a standard 2 × 2 brick (4 studs on the top, 4 sockets on the bottom, cubic in shape).

Except for the block’s width and length, all of these figures will remain constant when comparing other block sizes, from 1 × 1 all the way up to 12 × 24 blocks. Of course, this is only assuming we’re looking at standard Lego blocks and not those that are several blocks high—in which case, you simply need to multiply the 9.6 mm (block’s height) by how many blocks stacked together equal its height. 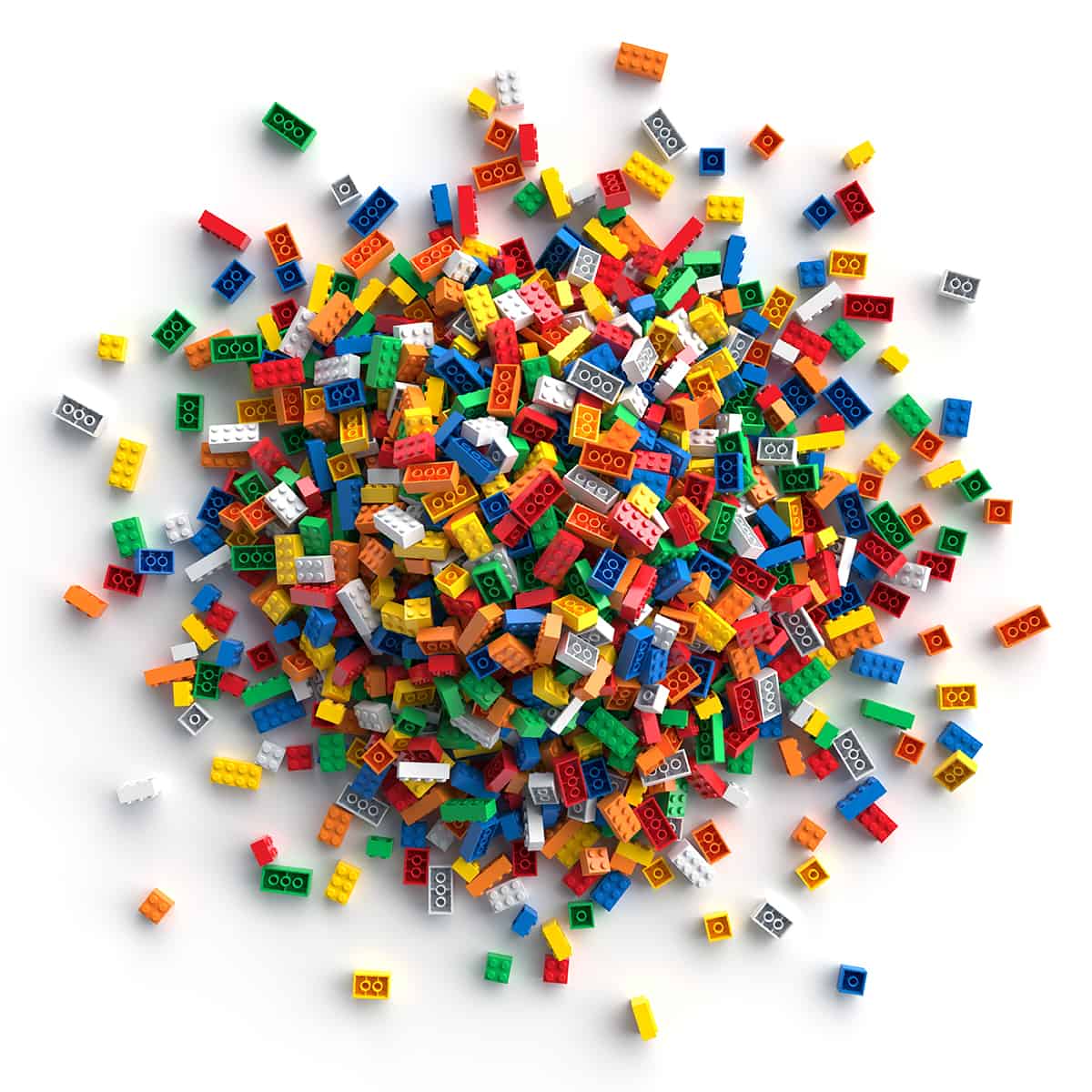 As previously mentioned, a “brick” is an umbrella term used to describe every Lego piece. In reality, the term “element” is more befitting.

Now, let’s take a look at all the names used to describe the different Lego pieces.

This is any Lego piece you can think of, whether it’s a brick, a tile, a baseplate, etc. So, if you want to be technical about your understanding of Lego, you should refer to every piece as an element.

Bricks are the most basic building piece in the Lego element catalog. They vary in shape, size, and color, but they’re the first kind of element people think of when they hear Lego.

A baseplate is a flat Lego element with studs and without sockets. It usually serves as the foundation for constructing Lego houses

Tiles are almost the exact opposite of baseplates in that they have sockets underneath but are smooth (stud-less) on top. Tiles allow users to give their Lego creations a smooth, flush finish from wherever they connect with a socket.

A plate is similar to a brick except it’s 1/3 the height of a standard brick. It will have studs and sockets to connect with elements from above and below.

It’s also worth mentioning that Lego people are also Lego elements. They have a stud on top and sockets on the soles of their feet. Their legs and arms are movable, and their hands can hold onto rods. Minifigs also have tons of headgear choices, like superhero masks and helmets.

A Duplo brick is a completely different set of blocks, though they are manufactured by Lego. Duplo blocks are much larger than their standard and highly intricate counterparts, making them perfect for children aged 5 and younger who want to express their creativity easily. In addition, due to their bulkiness, they are not as much of a choking hazard for toddlers and younger.

What Are the Cylinders Underneath a Lego Brick Called?

One common misconception about Lego bricks is that the cylinders found on the underside are sockets. This is not the case. They’re simply known as cylinders, and they serve a completely different purpose from sockets.

Cylinders have holes measuring 4.8 mm in diameter, which is the perfect size for a pin to fit.

Pins are used for joining beams together, but they’re mainly there to create a rotating or pivoting point between 2 blocks. You’ll also find Lego elements—most commonly the 1 × 2 brick—with a hole punched through the side wall.