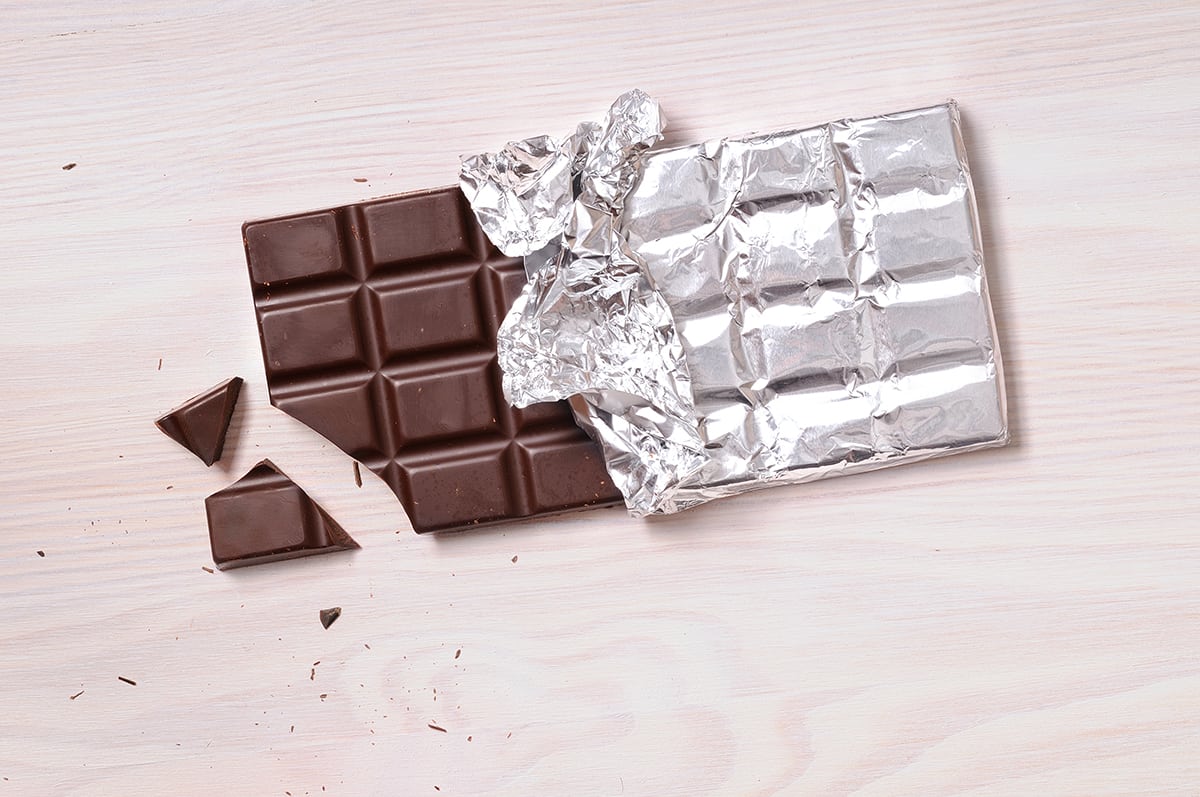 When people think of chocolate, there’s probably one brand that pops into mind: Hershey’s. The first Hershey Bar was invented in 1900, making it one of the oldest candy bars to date. As often as we find ourselves around Hershey’s chocolate bars, we never really pay attention to their dimensions.

There’s still so much more we can learn about Hershey’s chocolate bars. Today, I’ll cover the dimensions of Hershey’s bars, what it’s made of, and its nutrition facts.

Milton S. Hershey had been in the confectionary game for several years before coming up with the iconic Hershey bar we know today. His interest in starting a chocolate company was sparked after seeing German machines effortlessly popping out chocolate bar after chocolate bar in Chicago. At the time, he wasn’t a very well-known figure in the candy industry, but that would change in a few short years.

After coming up with the perfect milk chocolate recipe in 1899, all Milton had to do was kick-start the mass-production process, and boom! On November 11, 1900, the world saw its first Hershey bar.

If you’re interested in learning more about the struggles Milton went through when coming up with his infamous chocolate bars, I urge you to check out this piece.

What Are the Hershey Bar Dimensions? 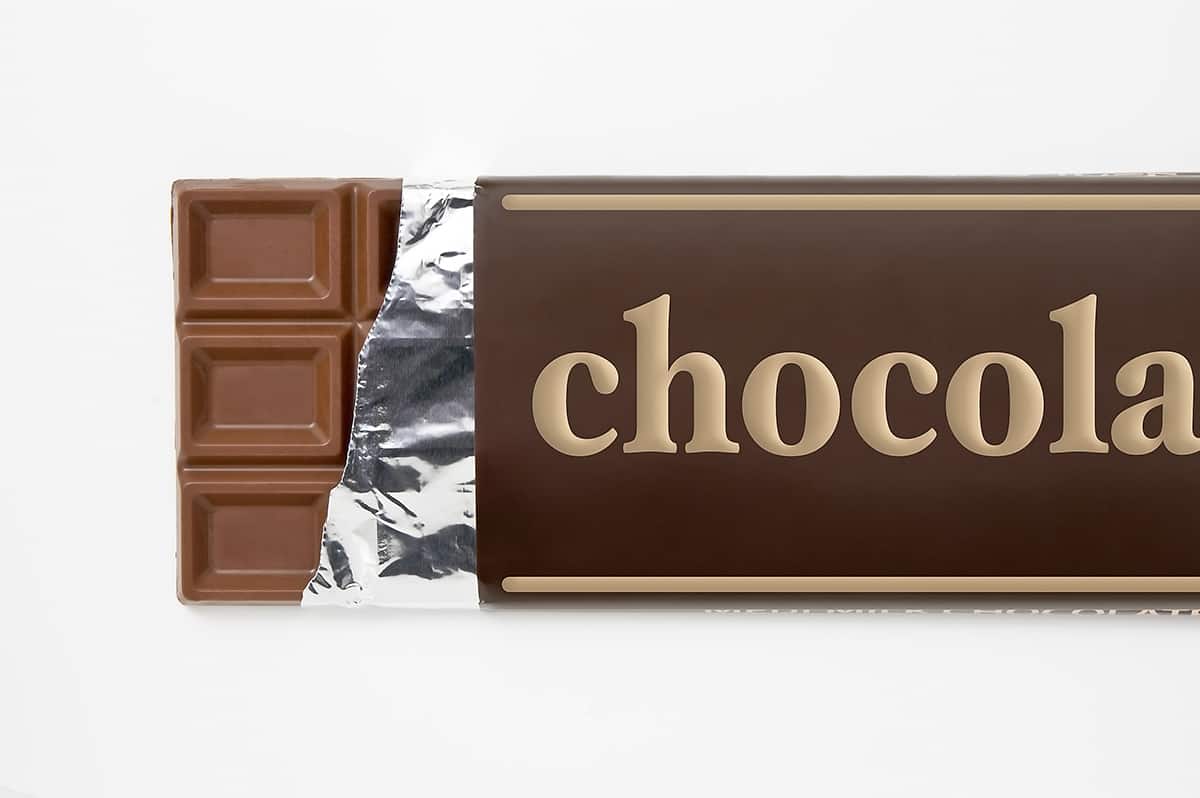 From the get-go, Milton molded the milk chocolate into rectangular bars that weighed precisely 1.55 ounces. The standard 1.55-ounce bar measures 5.375 inches long, 2.25 inches wide, and 0.25 inches thick. Each standard-size bar can be broken into 12 equal-ish pieces that measure approximately 1.34 × 0.75 × 0.25 inches.

Over time, there would be other types of Hershey bars, including the almond variety, that were sold as 1.45-ounce rectangles that measure 5.13 × 1.75 × 0.36 inches. Instead of coming with breakable parts, it is a solid bar of chocolate that has the iconic Hershey logo “stamped” onto it.

However, the largest mass-produced Hershey bar you can get your hands on weighs in at a whopping 7.56 ounces. The giant chocolate bar is approximately 6.7 × 3.75 × 0.25 inches, and it has 25 parts that measure the same as each block in the 1.55-ounce size.

But if you’re interested in pounds and pounds of chocolate, then you should take a look at Hershey’s 5-pound behemoths. The dimensions of this bar, which is enough to cause a standard chocolate fountain to overflow, measures 18 inches long, 9 inches wide, and 1 inch thick. Like the 1.45-ounce bar, you’ll need to a knife (or use your teeth) to break it into uneven pieces.

What Are Hershey Bars Made of?

If you take a look at the ingredients list, you’ll find that a Hershey bar contains the following in unspecified quantities:

Something that might shock you is that Hershey bars contain butyric acid. While it might sound like just another chemical, it’s actually a common ingredient in parmesan cheese and yogurt, so don’t feel too worried about this!

I’m not here to preach about the healthiness, or lack thereof, of Hershey bars. Everyone is free to decide how much chocolate to devour in one sitting. However, for the health-conscious wondering whether or not Hershey is healthy or not, the nutrition facts table speaks for itself.

Per 1 serving, which is a full 1.55-ounce bar, you will consume the following:

So, if you’re a fan of chocolate but want something a bit better for you, you should skip the sugar-laden milk chocolate and stick with bitter dark chocolate.

Are Hershey Bars and Hershey Kisses the Same Kind of Chocolate?

How many Kisses equals a single 1.55-ounce Hershey Bar? 1 Hershey’s Kiss weighs 0.0155 ounces. As such, you would need to unwrap and consume 100 Kisses to get the same chocolatey goodness from a single standard-size bar.

Just for fun, do you know how many Kisses it would take to make an entire 5-pound Hershey Bar? If you guessed 5,161.29 Kisses, you’re correct!

What Other Products Does Hershey Make?

For the fans of Hershey’s out there, you might be interested to learn that Hershey’s makes dozens upon dozens of products, many of which are not chocolate-based. I’ll list the different Hershey products down below and separate them by their chocolatey-ness.

What Was the Largest Hershey Bar Ever Made?

In January 2020, Mars thought it had accomplished a near-impossible feat by coming up with the largest chocolate bar in the world. While the 2-foot-tall, 2-ton Snickers bar is not something to scoff about, Mars didn’t have much time to celebrate its outstanding accomplishment.