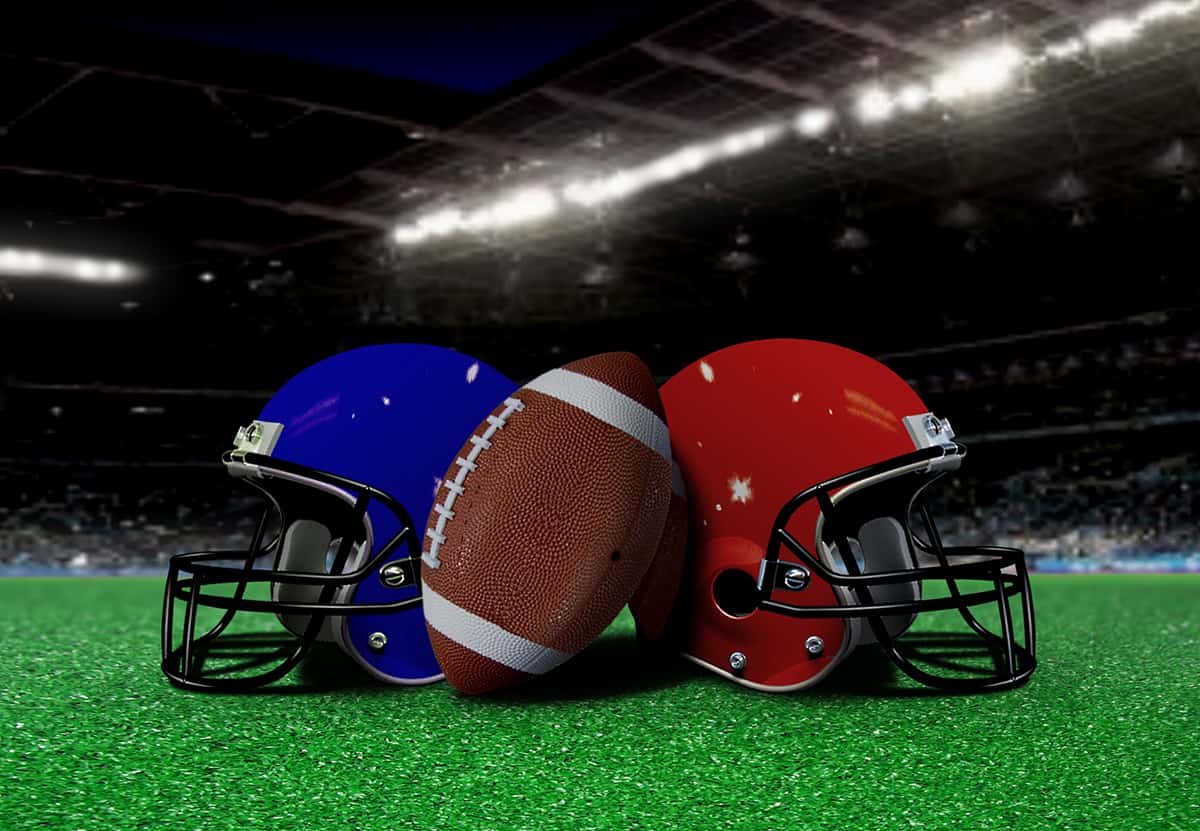 It goes without saying that football is one of the most dangerous sports on the planet, which is why players are forced to put on several layers of protective padding to prevent long-term damage to their heads and bodies. While the efficacy of wearing protective football gear is debatable, it’s still better than wearing absolutely nothing.

If you don’t have time to read the entire article, let me sum it up for you real quick:

On average, players wear up to 35 pounds (15.88 kilograms) of football gear during professional games.

To learn more about the weight of football gear, I urge you to continue reading.

Types of Football Gear and Their Weights

There are several kinds of equipment a player must wear before stepping foot on a football field. I’ll go through each of the most essential pieces and their weights. 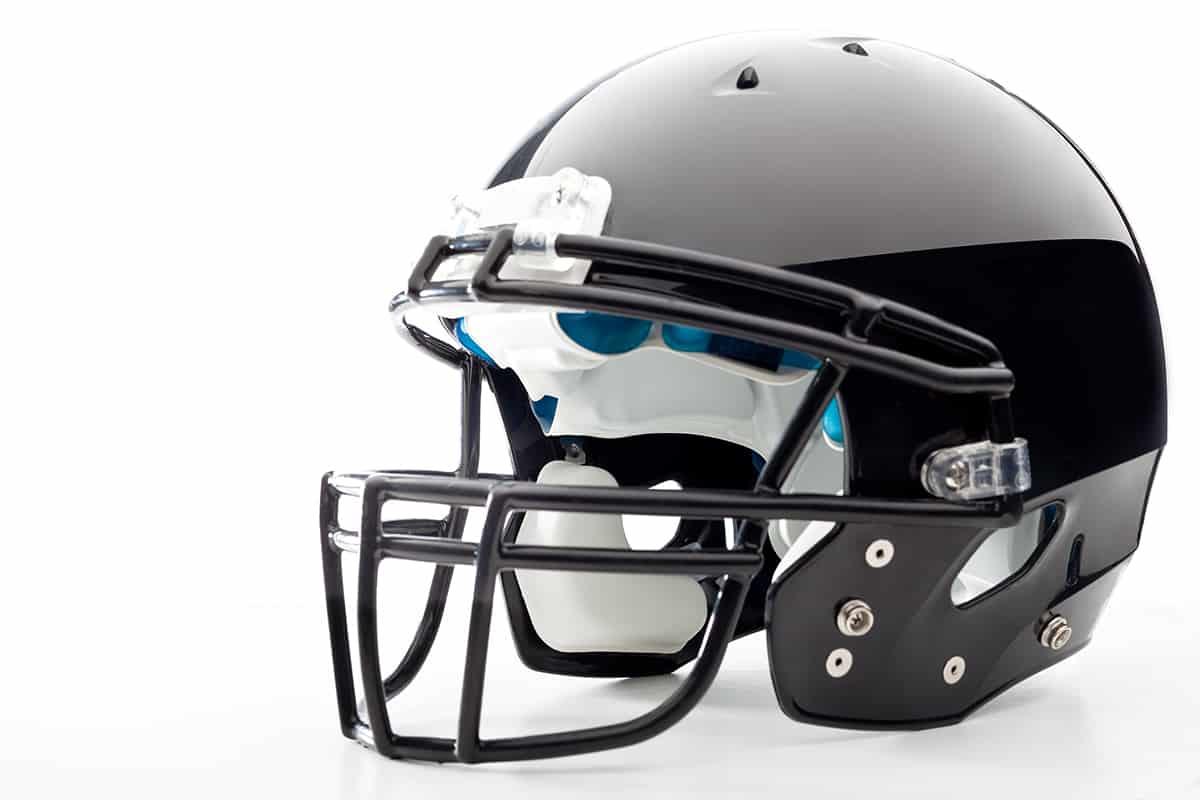 Football helmets are comprised of two main components—the hard outer shell made of a strong polymer and an internal shock-absorbing lining made of polyurethane or nitrile foam. The purpose of the helmet is to protect the player from head trauma as a result of hard impact.

Some football helmets also come with a face mask that is made up of two titanium bars. These bars are corrosion-proof and will protect the player’s nose and face from injury. 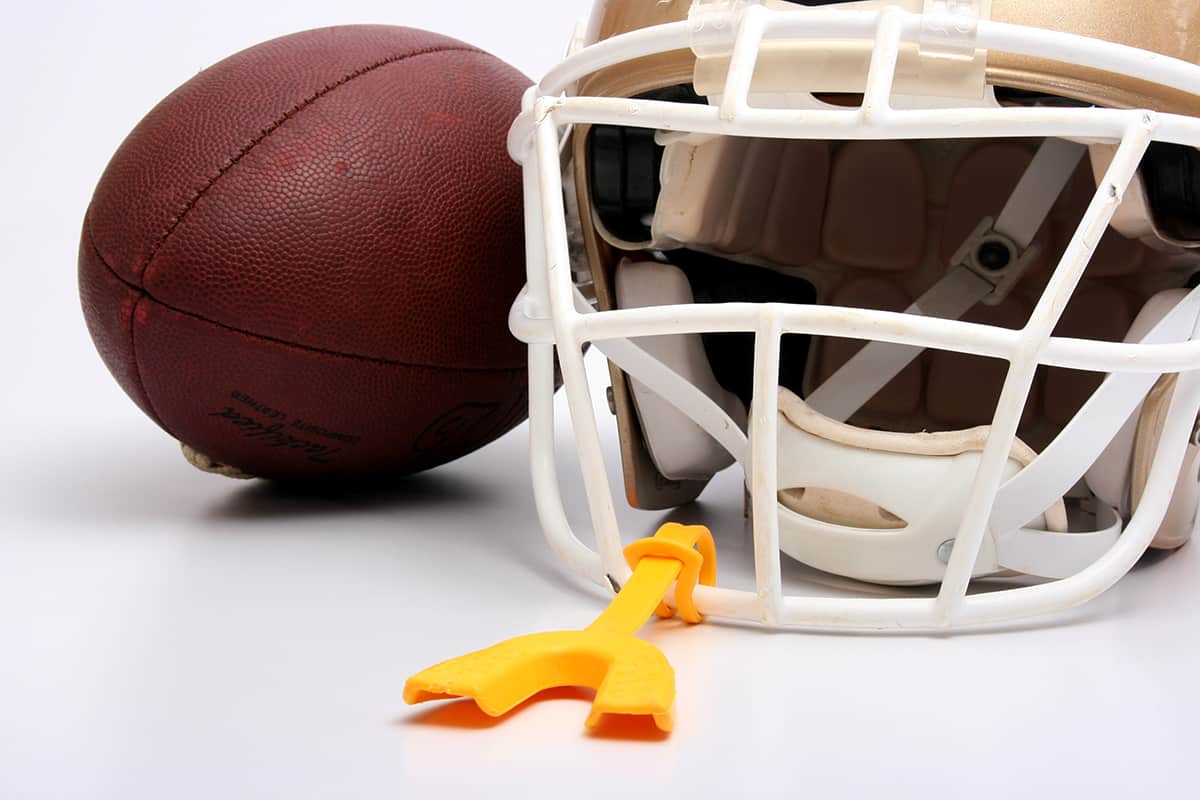 While a helmet mask can help stop large objects from hitting the player’s face, it won’t do much at protecting a player’s mouth and teeth. Like any sport, mouthpieces are essential in preserving a football player’s teeth, so they go home with as many teeth as they came onto the field with.

Mouthpieces are typically made of vinyl resins or natural rubber. They’re incredibly lightweight yet durable. At most, they’ll weigh about 0.625 pounds (0.28 kilograms). 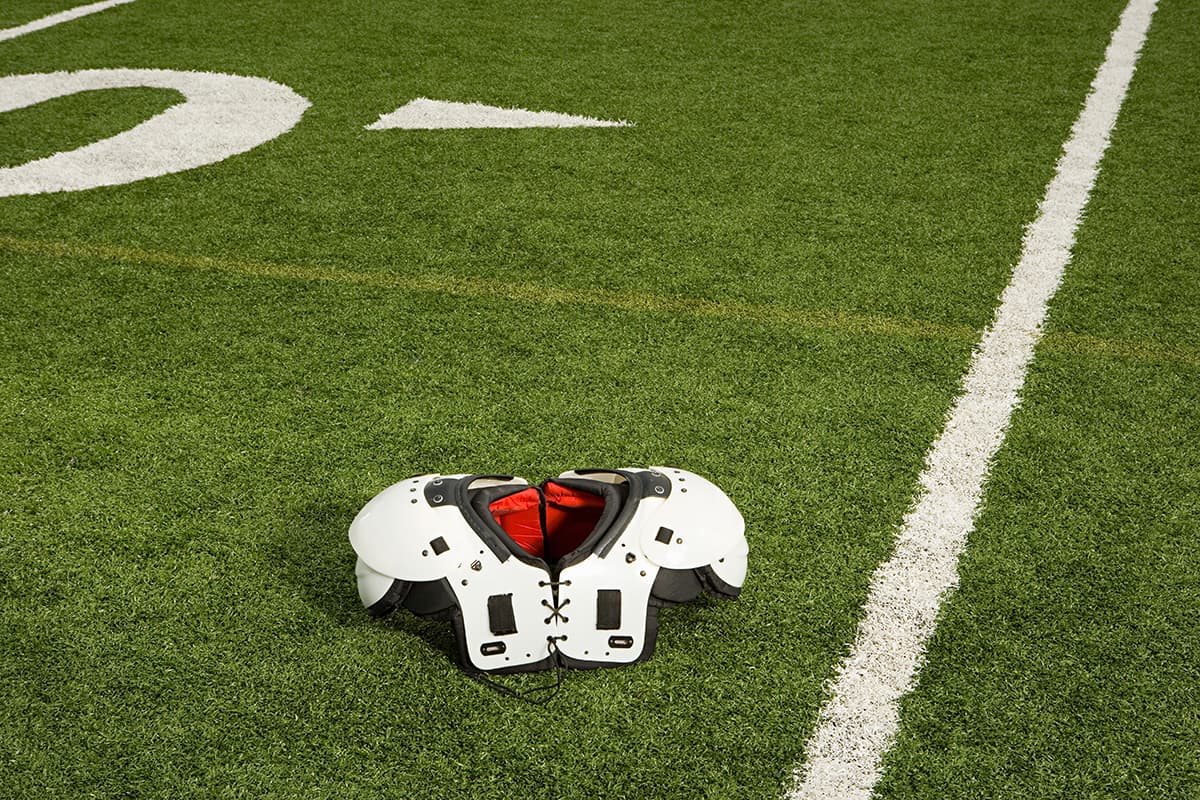 In almost every sport, padding serves to protect a player from sustaining injuries to their bones and muscles. In football, players wear shoulder paddings that are constructed to withstand tremendous amounts of force during play. Without shoulder pads, a player is more susceptible to torn ligaments, which can cause them to miss several games in a row.

There are three football shoulder pad types—flap style, wrap-around style, and hybrid style. The player’s position will determine which type of shoulder pad to wear during games.

Parts of the body with joints—e.g., elbows, knees, thighs, and hips—cannot sustain trauma naturally. As such, players must wear padding on these body parts to ensure that nothing pops out of their sockets during gameplay.

Excessive trauma to these body parts can result in broken bones and/or strained cartilage, which can sideline a player for an entire season.

As you can imagine, football players can experience tremendous amounts of trauma to their heads and necks. This is why players like linebackers should wear neck rolls, which is a sort of cradle that keeps the player’s neck stable when the game gets tough.

The neck roll prevents the player’s head from snapping back when they smack head-first against the ground or other players. While they might not be failproof, they may help keep the player’s head in place and prevent whiplash.

There are several types of neck rolls with varying levels of bulkiness. On average, neck rolls will weigh around 1 pound (0.45 kilograms). 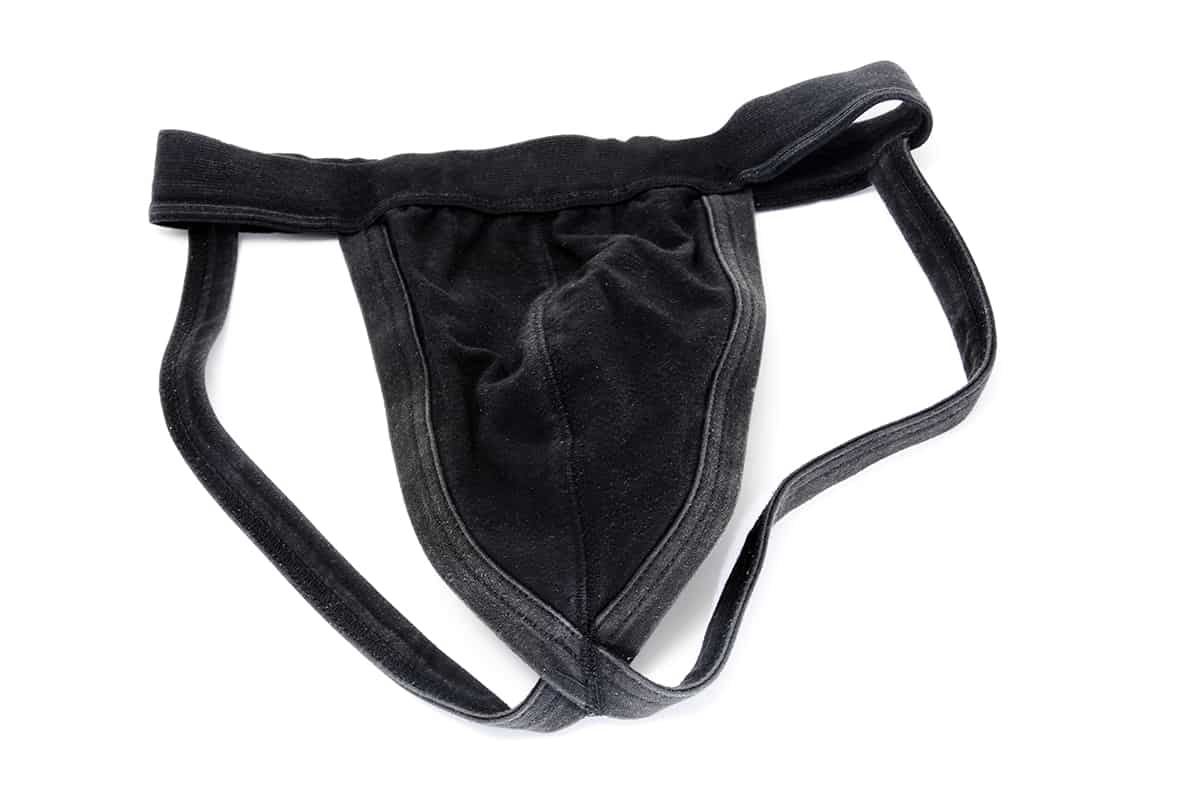 Jockstraps or cups are hard pieces of equipment that fit inside the football player’s pants to protect delicate parts of their bodies. You can imagine how wrong things could go if a player received an elbow, knee, or cleated foot to the groin. 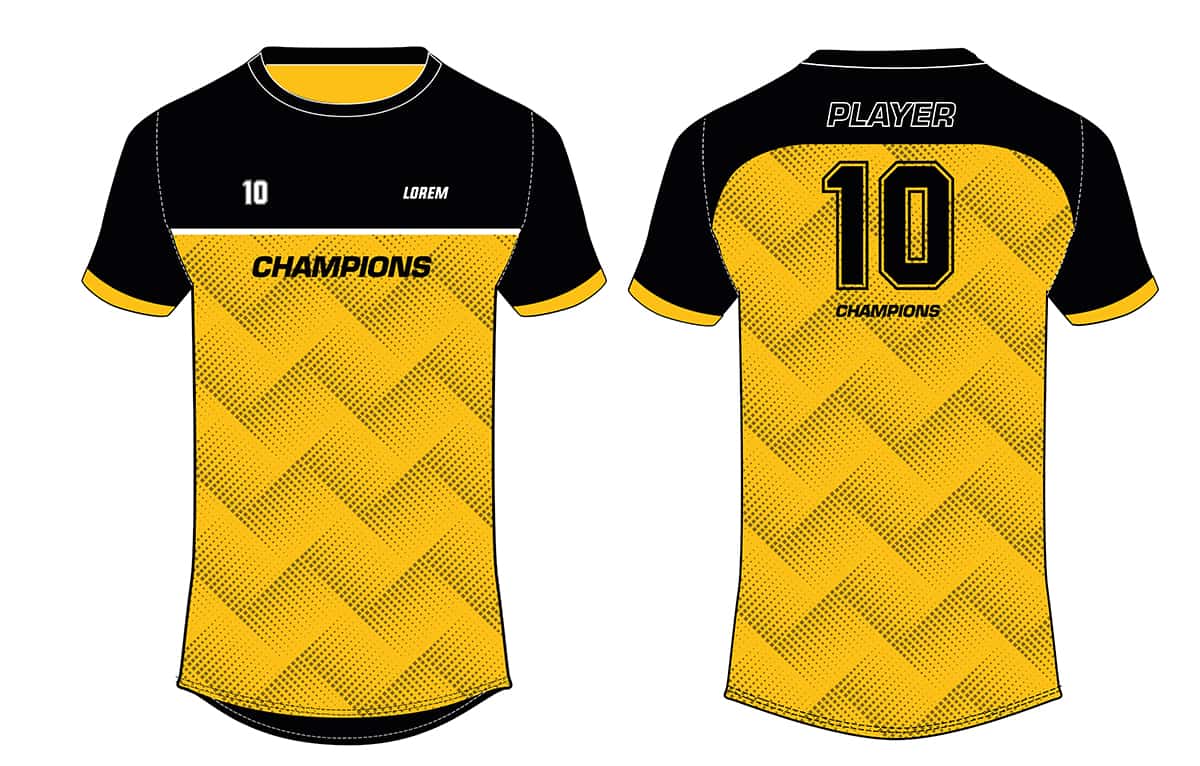 A football jersey is a special piece of clothing that a player wears to distinguish their teammates from their opponents. Football players typically wear different jerseys for home and away games. If two opposing teams wear similar-colored jerseys, one team has to wear a jersey of a different color to avoid confusion.

Modern jerseys are made of lightweight materials, such as a blend of cotton and synthetic fibers. The only factor that affects a jersey’s weight is its size.

The typical game-worn football jersey will weigh around 1 pound (0.45 kilograms).

Football pants are comprised of two components—the fabric that makes up the outer portion of the pants and the internal foam padding. The padding adds an extra layer of protection on the player’s thighs and hips in case anything goes wrong with the hard padding. 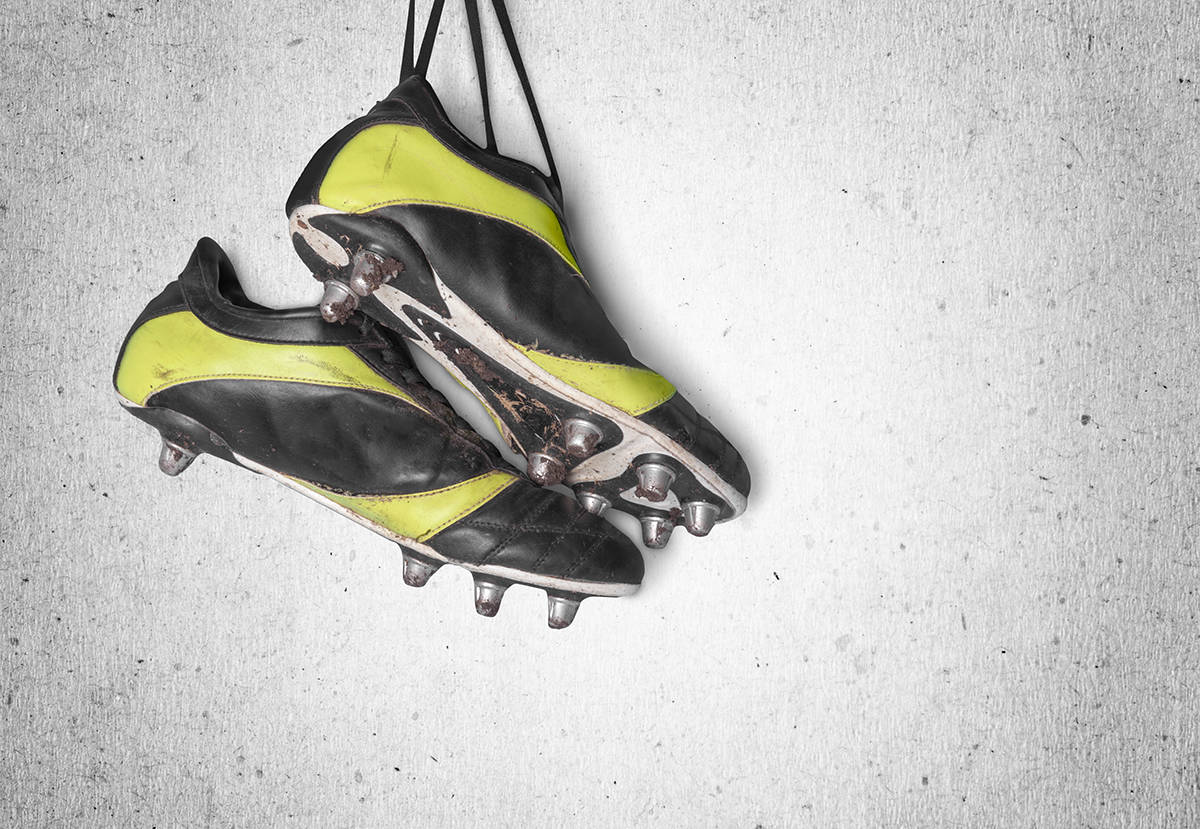 Last but not least, we cannot forget about the player’s footwear. Football cleats are a specialized type of shoe that provides extra traction as they accelerate and run across the 120-yard football field.

Different player positions may wear different types of cleats. For instance, a punter might wear two different kinds of shoes—one for planting their foot to keep them steady while the cleated foot kicks the ball.

And there you have it, folks. A football player can wear up to 35 pounds of football gear. This is only a rough estimate as I didn’t factor in the size of the padding, which may significantly reduce the overall weight.

If you found this article useful, make sure you share it with your football-loving friends on social media. I’d also love to hear which football gear you would add to this list and their weights (if you know them).